Unbreakable Bonds: How a ‘Wolfhound’ tradition got started

The Army’s 1st Battalion, 27th Infantry Regiment is known for being fierce on the battlefield. But the unit famously known... 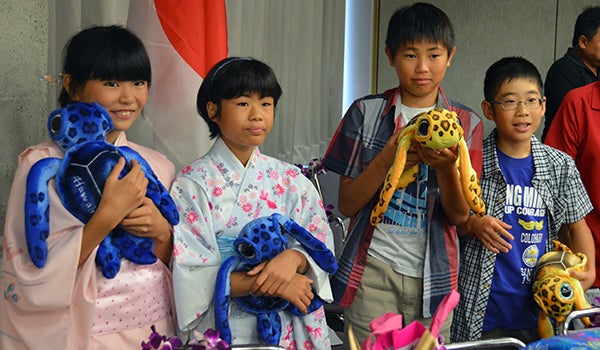 The Army’s 1st Battalion, 27th Infantry Regiment is known for being fierce on the battlefield. But the unit famously known as the “Wolfhounds” also has a softer side.

Four children from a Japanese orphanage are set to arrive Monday [7/24/2017] in Hawaii, where they’ll stay with Wolfhound host families for about two weeks. During that time, the kids will get to play at the beach, tour local attractions and experience life as a soldier, complete with a meal at the Wolfhounds’ mess hall and a chance to try out the unit’s course.

While the kids have never experienced this before, the Wolfhounds certainly have. This is actually the 60th year they’ve done this, making it one of the longest-standing traditions with civilians in the history of the Army. And it sprang from another tradition of compassion that began shortly after World War II.

So what’s this all about? To explain, let’s take it back to the beginning.

The 1st Battalion, 27th Infantry Regiment was activated on Feb. 12, 1901, and was originally based at Fort McPherson, Georgia.

The Wolfhounds earned their nickname in Siberia in 1918 when, as part of World War I’s allied expeditionary force, they aggressively pursued retreating Bolshevik forces while guarding the Trans-Siberian Railroad.

In 1921, the regiment moved its home base to Schofield Barracks on Oahu, Hawaii, and began building a reputation as a group of soldiers with enviable training and athletic prowess.

They became part of the 25th Infantry Division, nicknamed “Tropic Lightning,” just a few months before the Dec. 7, 1941, Japanese attack on Pearl Harbor. Schofield was also a target that day, and the Wolfhounds refused to be sitting ducks, fighting back from the barracks’ rooftops.

In the next few years, the Wolfhounds fought during major Pacific campaigns at Guadalcanal, in the Northern Solomon Islands and on the Philippine island of Luzon.

Once Japan surrendered, the Wolfhounds served as part of an occupying force for several years. And in 1949, that’s where all of this tradition began.

On Christmas Day 1949, a dozen Wolfhound soldiers went with a Red Cross field representative to a holiday party at the Holy Family Home orphanage in Osaka, Japan. What they found was children living in squalor. Their homes were shabby, cold and abandoned barracks, and the Catholic nuns who were working on their behalf had to sell trinkets just to get enough food for them to survive.

The Wolfhounds who attended the event were so deeply moved by their plight that they took up a collection and donated it to the children. Soon the whole regiment got involved, and the men began spending their free time helping the nuns repair the orphanage. They all grew close, and the regiment started collecting funds for the kids on a regular basis – even when they were sent to serve in the Korean War in the early 1950s.

Eventually, their contribution changed form. In 1957, the Wolfhounds started hosting some of the orphans on a trip to Hawaii so they could experience family life with Wolfhound volunteers, as well as explore Oahu.

And that’s the tradition that continues today!

A year after the Hawaii tradition began, so did another that continues today: Every year, two Wolfhounds are sent to the orphanage around Christmas to give them gifts and play “Father Christmas.”

Over the years, the Wolfhounds earned many Presidential Unit Citations for their bravery and effectiveness in combat, including during Korea and in the Vietnam War.

There are more Medal of Honor winners in the Wolfhounds than any other regiment in battles going back as far as the Spanish-American War.

James Jones, who wrote the acclaimed novel “From Here to Eternity,” was a Wolfhound. The book was later turned into an Academy Award-winning film starring Burt Lancaster and Frank Sinatra.

The 1955 movie “Three Stripes in the Sun” was based on the regiment-orphanage relationship.

The Wolfhounds’ have a mascot – a purebred Russian wolfhound named Kolchak XVI (check out his own personal blog here!). He’s one of many iterations of the original mascot, presented to the regiment in 1929. They’re both named after Adm. Aleksandr Kolchak, who fought the Bolsheviks during the regiment’s stay in Siberia during World War I.