USNS Comfort: How the hospital ship helps during disasters

The USNS Comfort has arrived in Puerto Rico to help with the humanitarian crisis that’s unfolded since Hurricane Maria devastated... 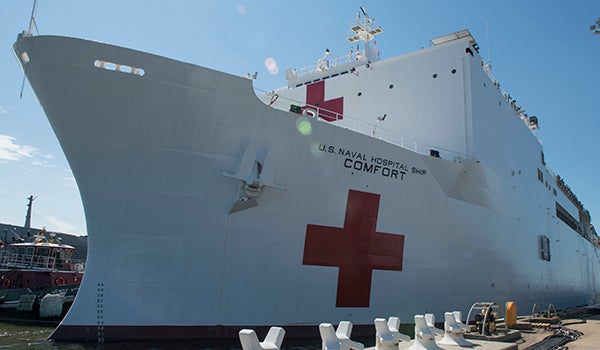 The USNS Comfort has arrived in Puerto Rico to help with the humanitarian crisis that’s unfolded since Hurricane Maria devastated the island. Since local hospitals have been overwhelmed and are dealing with power and supply shortages, the Comfort will be able to provide a great amount of support to those in need.

Not sure what, exactly, the USNS Comfort is? Here are some facts about it.

The USNS Comfort is one of two of the Navy’s Mercy-class hospital ships.

Since 2013, the Comfort’s home port has been Naval Station Norfolk, Virginia. While its primary mission is to provide medical care to U.S. troops to support expeditionary warfare, it also provides full hospital services during disaster relief and humanitarian crises around the world.

The Comfort was delivered to the U.S. Navy’s Military Sealift Command in 1987 and has been deployed around the world ever since.

It has one of the largest trauma facilities in the U.S.

When it’s activated, the hospital has a full spectrum of surgical and medical services including four X-rays, one CAT scan unit, a dental suite, an optometry and lens laboratory, a physical therapy center, a pharmacy, an invasive angiography suite and two oxygen-producing plants. Comfort also maintains up to 5,000 units of blood.

Patients arrive aboard primarily by helicopter, but sometimes by small boat.

When it’s fully activated, the Comfort’s crew is made up of 65 civil service mariners and more than 1,200 Navy medical personnel. When it’s not deployed, it reduces its operational status but keeps a small crew on board to maintain the ship in a high state of readiness.

Navy Religious Program Specialist 3rd Class Jose Reyesbermudez volunteered to be part of the religious ministries team aboard the Comfort. He’s from Bayamon, Puerto Rico, and is stationed at Naval Hospital Jacksonville, but he still has loved ones on the island, including his mother, who he said has been struggling to find food and gas since Maria hit.

“I want to be the best asset I can be. I would be glad to participate in any mission, from rescue to delivering food – whatever it takes. And hopefully I can see my mother on this trip and give her a few things,” said Reyesbermudez.

As part of the religious ministries team, he looks forward to connecting with the people in Puerto Rico to give them hope as well as moral and spiritual support.

“I’m excited to be on the Comfort,” he said. “I would be perfectly content if I had the opportunity to talk to even a couple of people and pray with them, share stories, inspire them and give them hope.”

Reyesbermudez’s knowledge of the island and the language make him a vital asset for the mission.

“He can help us help them,” said Cmdr. Michael Chaney, head chaplain aboard Comfort and deputy chaplain assigned to Naval Medical Center Portsmouth. “Being bilingual and from Puerto Rico, he will allow us the opportunity to fill in details when the bigger picture comes in, such as helping us know precisely the best street to go down or the best way to receive people. We’re so blessed to have him.”

Some of Comfort’s important missions over the years:

Haiti Earthquake Relief: January-March 2010. Comfort was called to treat seriously injured patients during the massive 7.0 earthquake that hit on Jan. 12, 2010. Medical personnel aboard the ship treated 871 patients, performed 843 surgeries, ran 10 operating rooms to care for survivors, and its crew delivered nine babies during the seven-week mission.

Continuing Promise: For many years, the Comfort has participated in this U.S. Southern Command training mission. During each mission, the Comfort has offered medical and dental care and preventative medicine to people in several countries, including Haiti, Guatemala, the Dominican Republic, Antigua and Barbuda, Panama, Colombia, El Salvador and Nicaragua.

Partnership for the Americas: June-October 2007. Comfort conducted a four-month humanitarian assistance mission in Latin America and the Caribbean, treating more than 98,000 people in 12 countries.

Hurricanes Katrina and Rita: September-October 2005. Comfort deployed to the Gulf Coast to help in the aftermath of the hurricanes. In 12 days, its medical crew provided treatment to nearly 1,500 people, as well as care to residents and emergency workers in Mississippi and Louisiana.

Operation Noble Eagle: Comfort activated the afternoon of Sept. 11, 2001, in response to the terrorist attack on New York’s World Trade Centers. From Sept. 14 – Oct. 1, Comfort was pierside in Manhattan, where the ship’s crew provided meals, housing, medical and psychological services to volunteer and relief workers at ground zero.