USS Indianapolis: What a woman learned about the father she never knew

Her curiosity originated in health class. Jae Anderson was in the fifth or sixth grade, and after hearing the birds... 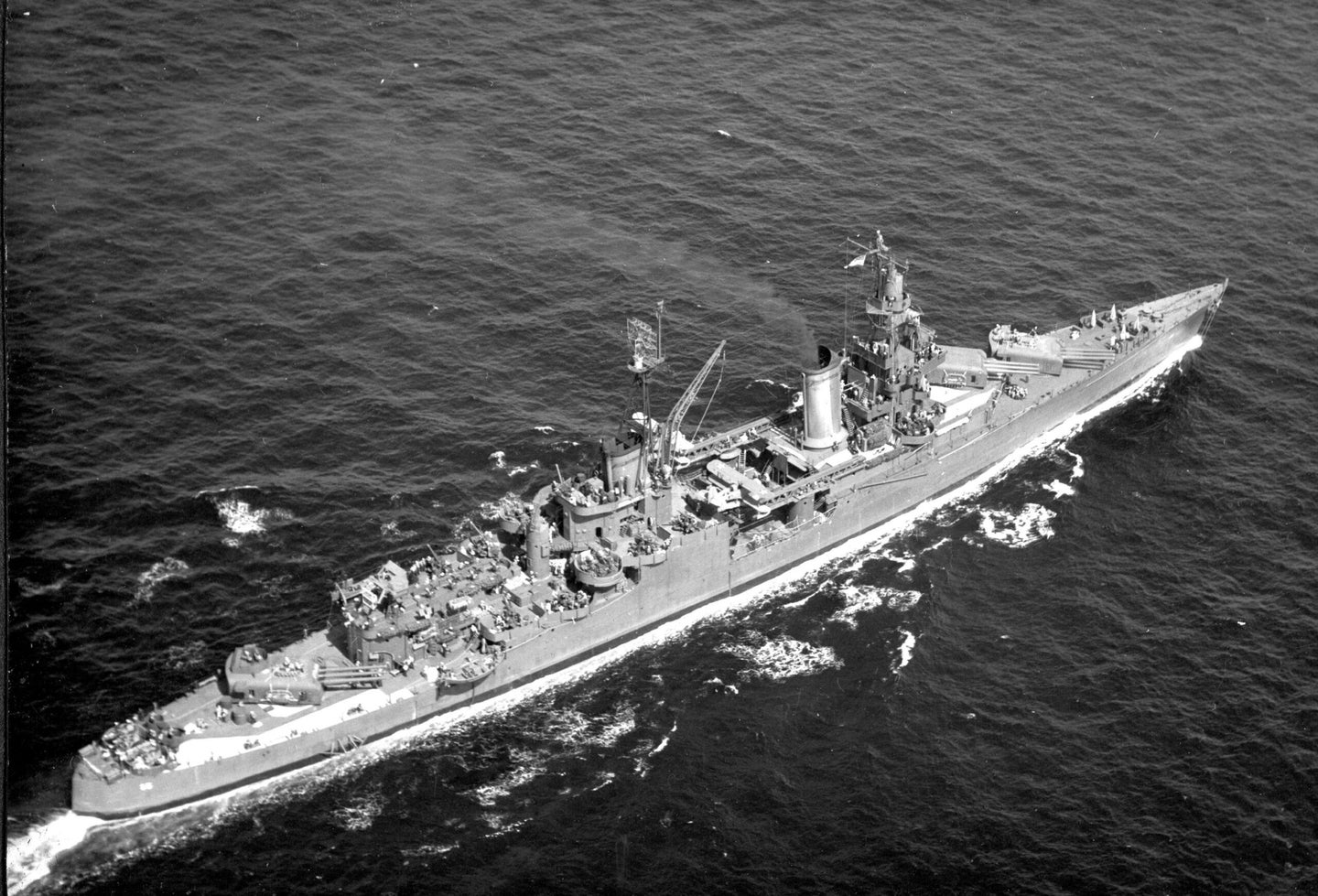 Her curiosity originated in health class. Jae Anderson was in the fifth or sixth grade, and after hearing the birds and the bees taught in the 1950s, she came home with a question for her mother: What happens if the dad dies before the baby is born?

Later that night, her mom and dad retrieved a scrapbook and sat her down. They flipped through picture after picture: of her mother, her father. In one, she saw her mother, wearing a wedding dress, smiling next to a man with blond hair. But Jae’s dad, the man next to her at that moment, had brown hair.

“Then I learned the story,” Jae says, from her home in Queen Anne.

In the final weeks of World War II, a blond lieutenant named Bob Hale was killed when his ship, the USS Indianapolis, sank in what became the worst maritime disaster in U.S. naval history. The horrific story of the sinking — and the four days that followed — inspired books, documentaries and a famous scene in one of the most famous movies of all time. But until a tweet from billionaire Paul Allen a few months ago, no one had seen the Indianapolis in 72 years.

Jae’s parents told her the man in the photo was her biological father. The brown-haired man she called Dad was his brother. When Bob Hale didn’t return, his older brother, Bill, married Bob’s pregnant widow and raised Jae, born New Year’s Day 1946, as his own.

Jae always wondered about her father. Her family rarely talked about him, and they never shared personal stories. What she knew were facts: He was 5-foot-10, he was president of the Kappa Sigma fraternity at Cal Berkeley, he drove cross-country with Bill in 1940. In high school, Jae’s mother gave her a book about the Indianapolis. She scanned its pages for any mention of her father. She found none.

The older she got, the more life demanded her thoughts elsewhere: marriage, kids, divorce, work. But she remained curious about a question for which she thought there was no answer: What parts of him are parts of me?

Jae didn’t know how she was supposed to feel when Paul Allen’s research team discovered the Indianapolis in August, 18,000 feet below the Philippine Sea, resurfacing the story and old emotions. The lost ship had occupied not only a significant space in Jae’s life but also in the history of World War II.

On July 26, 1945, the Indianapolis completed a secret mission to Tinian, a tiny island near Guam. Unknown to the crew, the crates they delivered contained components of Little Boy, the atomic bomb dropped over Hiroshima. Four days later, just after midnight, two Japanese torpedoes sank the Indianapolis in 12 minutes. An estimated 300 men went down with the ship, including, Jae believes, her father. The rest were left to float.

By the time a plane spotted the survivors, four days after the sinking, only 317 of the ship’s 1,196-person crew were rescued.

That something terrible had happened was clear from the earliest news reports, but the true horror didn’t trickle out until later. Men went mad in the water: cold nights, sun-cooked days, little food, water or sleep. Some hallucinated and tried to kill their shipmates. Others were killed by sharks, their friends helpless to do anything but watch — or listen. One survivor, who taught the men around him how to pray, said, “There are no atheists in the ocean.”

Steven Spielberg didn’t know about the Indianapolis as a young director in the early 1970s, but when he heard what he later called a “horrendous piece of World War II history,” he included it in his first blockbuster: “Jaws.” The speech Robert Shaw’s character gave about the Indianapolis and the shark attacks became arguably the most famous scene in one of the highest grossing movies ever.

Allen’s interest in uncovering lost history stemmed from his father, an infantryman in the Army engineers during World War II. In the case of the Indianapolis, Allen’s team spent three years searching for the missing ship.

Others had tried, but as Samuel Cox, the director of the Naval History and Heritage Command, put it on a PBS special about the discovery: “Take the Himalayan Mountains, turn them upside down and inside out. Trying to find something in there is an incredible challenge.” New technology and a dedicated research team combined to solve one of the war’s lingering mysteries.

Jae knew the story of the Indianapolis, but she disliked when people told her they were sorry for her loss. How could she mourn a man she didn’t know? How could she feel sorry for herself when she had a dad who raised and loved her, and whom she loved in return?

She didn’t know what to feel.

Jae is 71 and retired, with a view of the Space Needle out her living-room window. In a few hours she has to pick up a friend at the airport before they set off on a road trip through the Olympic National Forest. For that reason, she says, she does not have time to find the letters from her father.

The letters offer the deepest insight Jae has into the man she never met. He wrote them during the war, and Jae came across them 15 years ago after her parents died. They are, most definitely, love letters.

An hour passes, and casually the letters come up again. Jae looks as if she’s considering whether to reveal something herself.

She heads down the stairs to the basement, where she opens a tucked-away closet door. Inside are neatly stacked boxes. As she runs her finger over them, she reads the labels aloud until: Bob and Barbara Hale.

“Let’s just open this and see what we can find,” she says.

There is a picture of the Indianapolis, as well as three copies of The Saturday Evening Post in which an article details the longest naval battle in history; her mother attached a note saying her father was the officer of the deck during that battle. Most of what she knows about him is in this box.

She pulls out a stack of envelopes with red and blue trim: 50 wartime letters addressed to her mother. Jae has read them only once.

Well, here it is exactly one month now. God, it’s been a long one. Do you realize that already we’ve been apart more than half the time we’ve been married? They can’t do this to us.

Honestly, darling, I used to think it was pretty fine getting this fine education and all the experiences and travel behind me just after college and before going to work.

Now all I think about is getting back to you and enjoying a normal peacetime life with you.

Why don’t you write me a dream or two on the subject? It’s a lot of fun even just having the dreams. Or shall we have a dog first? Do you like to go camping? Did you ever think of going on a pack trip up in the mountain and really roughing it with nature?

I’m sorry if I seem to be rambling, sweet. Just things I think about when I think of us and the future.

After she brought the letters up from the basement, she walked by them every day, even thought about reading them again. Instead, she put the letters back in storage.

Jae doesn’t know how the loss affected her mother — another answerless question — but she says her mother demonstrated a deep anger, often directed at her only child. Memorial Day weekend was never fun around the house, and Jae doesn’t remember her mother saying, “I love you.”

It’s something she’d rather not dig up.

She regrets she didn’t push her parents or grandparents for stories about her father, that she didn’t say, “Damn it, I deserve to know. I want to know. It’s part of me. Tell me.” So she compartmentalized the loss, her mother, her childhood, and built a wall around all of it. She doesn’t want to be cold, but she couldn’t spend her whole life soul searching.

Jae considers why she never reread the letters.

She stares across her kitchen.

“It’s kind of like admitting that this is more painful than I want to deal with.”

D’ya know it’s been 4 weeks and a day since I saw you? Damn, that’s too long. I remember the last time when I was gone about that long. Gosh, I was low. I’m not low at all now. Just lonesome for you. Terribly lonesome.

You know the time allotted for sleep in the Navy isn’t a very large figure, but out of that time I would much rather just lie in bed and think about you than sleep.

She watched the PBS special in her apartment. For years she felt detached from the sinking; in many ways, she still does. But when she watched the new footage, not distant black-and-white photos of the ship but live shots from the bottom of the ocean, it became real. Now she wants to visit the memorial in Indianapolis.

The special pointed out where the crew was sleeping, the different decks and guns on the ship where her father died. “All of that was just powerful,” she says. “It was meaningful.”

She has cried only once, when she saw a photo of her father on a website dedicated to the Indianapolis. She always knew she got her light hair from him and her blue eyes, but now she thought, “I really look like him.” The same round face and chubby cheeks, the same smile.

There was nothing stern about him. Nothing sad. He looked joyful, a well-maintained person, a lot like how she sees herself.

By Jayson Jenks, The Seattle Times