As a young child in the 1950s, Dr. Limone Collins remembers distinctly his mother taking him by the hand to the... 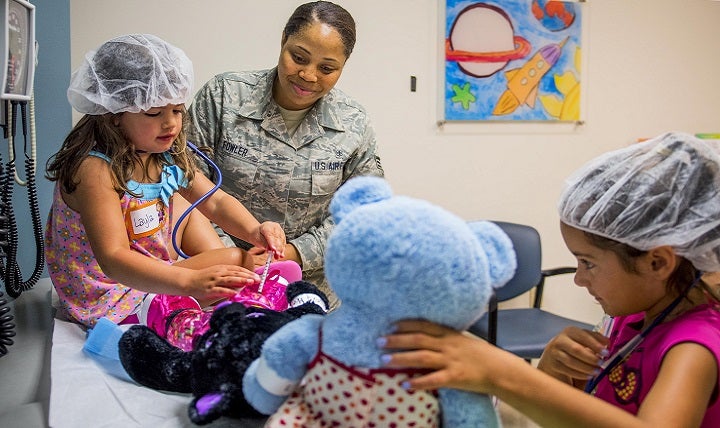 As a young child in the 1950s, Dr. Limone Collins remembers distinctly his mother taking him by the hand to the local school to get a sugar cube covered with the polio vaccine.

“My mother thought she was doing the greatest thing, because they recently had a president [Roosevelt] who had polio. So it was a real thing to them,” said the retired Army colonel and career pediatrics doctor. “It didn’t take a whole lot to convince her to get her child vaccinated.”

Getting necessary vaccinations now is as much a rite of going back to school as picking up pencils and paper for the first day. Collins has seen every level of the vaccination cycle: from being a child getting his own immunizations, to being a pediatrician, to now chief of vaccine safety and evaluation for the Immunization Healthcare Branch with the Defense Health Agency. For example, while training as a military doctor in the late 1970s at the old Walter Reed Army Medical Center in Washington, D.C., he saw firsthand how devastating Haemophilus influenzae type b, better known as Hib, was.

“It wasn’t unusual for us to see children with ailments secondary to Hib, such as meningitis, still a deadly disease to this day, or even one child I saw who developed a heart inflammation,” said Collins. “It was a significant disease responsible for a lot of problems, short and long term.”

“If you asked any pediatric or family resident doctor today, ‘How many cases of Hib and its related problems do you see?’ The answer would be zero,” said Collins. “Many pediatricians in the United States have never even seen a case.”

“Vaccines are among the most important accomplishments in medicine,” said Collins’ colleague, Dr. Margaret Ryan, medical director for the Immunization Healthcare Branch’s  Pacific Regional Vaccine Safety Hub. “They’ve saved more lives throughout the world than any other medical invention, including antibiotics or surgery. The safest and best way to acquire immunity is through vaccination.”

But that drop in cases now doesn’t reduce the need for a safe and effective vaccine. An important aspect of immunizations is “herd immunity,” or vaccinating enough people to protect an entire community. This is especially important for those with medical conditions that prevent them from being immunized, or those at high risk of complications from infection, such as the elderly or those on immune system-suppressing drugs for other conditions. Between 80 and 95 percent of the community must be vaccinated for herd immunity to be helpful.

“Some people can’t get vaccinations because of their medical conditions,” said Ryan. “Yet these vulnerable people will still be protected if a very high proportion of their community is vaccinated. This is because, when vaccination rates are high, infectious agents, such as viruses, cannot easily circulate and survive in the population. Everyone ends up better protected.”

For parents sending their children back to school, Military Health System providers follow the same schedule for immunizations as the Centers for Disease Control and Prevention. Most of the vaccines recommended for children should be completed before a child starts school. Vaccines to prevent meningitis, human papillomavirus, which can cause cervical and genital cancers, and additional immunizations for tetanus, diphtheria, and pertussis (whooping cough), are recommended for children ages 11 to 12. All children older than six months should get an annual flu shot.

In recent years, some vaccine-hesitant parents have become concerned about the immunizations for their children. Collins said the success of vaccines – the absence now of some of the world’s historically most devastating diseases – has, ironically, undermined the need for immunizations in some people’s minds. Both Collins and Ryan emphasized that it is very important to listen to those parents and answer any questions they might have with the most powerful tool the Military Health System has: information. That’s why the Immunization Healthcare Branch has four Regional Vaccine Safety Hubs, such as the one where Ryan works. Each hub has a clinical staff of doctors, nurses, and immunization health care specialists. The doctors and nurses from the hubs are available 24 hours a day, seven days a week to answer questions through the Immunization Healthcare Support Center at (877) GETVACC (438-8222), option 1.

Air Force Col. Tonya Rans, chief of the Immunization Healthcare Branch, reminds parents of the need and the benefit of getting their children vaccinated.