As an entrepreneur, appearing on Shark Tank was never a goal. My goal has been to transform TurboPUP into a success. But Shark Tank is a very important step toward achieving that goal. 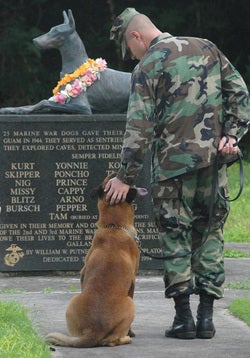 Four years ago, inspiration unexpectedly struck during a backcountry ski trip with my four-legged sidekick Dunkan. The idea would

morph into my fledgling company TurboPUP, a name aptly representing the team that started it: me (aka “Turbo”) and Dunkan, my awesome “PUP.” My entrepreneurial journey has often felt like a chaotic hodgepodge of synchronistic events. But on Friday, January 16, one event will make TurboPUP history: my appearance on ABC’s Shark Tank.

Even though my entrepreneurial journey has often felt chaotic and unpredictable, a majority of its highlights can be traced back to the Veteran Women Igniting the Spirit of Entrepreneurship (V-WISE) program I attended in San Diego in August 2012, hosted by the Institute for Veterans and Military Families at Syracuse University (IVMF). After serving in the military for eleven years, one would assume that I’d have a knack for teamwork, but when I embarked on my entrepreneurial path, I believed I could do it alone.

Walking into V-WISE San Diego, I realized that couldn’t be further from the truth. The energy at the conference was palpable! I was surrounded by successful, beautiful and positive women; I couldn’t have been more inspired. I realized I needed more wonderful, like-minded women in my life, including a team of sisters to support the needs of my soul as I took baby steps toward becoming a full-time entrepreneur.

Not only did I meet one of my dearest friends and a future business confidante, Sue Jones, at V-WISE, but I also met the sensational Nell Merlino. Merlino was a guest speaker at the conference and taught me how to pitch–an essential skill for Shark Tank–during one of our breakout sessions.

Merlino is the founder of ‘Count Me In’ and the Women Veteran Entrepreneur Corps (WVEC). Through WVEC, I met Hillary Blair, founder of Articulate ERC. After a web-coaching session for the Bend Venture conference she gave me some great advice: “good energy…nice slide show…NOW, stop pacing like a caged animal! You are going to make people nervous!” She was right, and everything Blair taught me would carry over through future pitches.

The V-WISE and WVEC programs expanded my veteran sister family into a group of women who have laughed with me through the best of times, and carried me through the worst of times. Most importantly my newfound sisters and access to business coaching enabled me to overcome my ultimate business obstacle: myself.

In the midst of the business coaching, I applied for the Citi SalutesSM: Realizing Your Dream Business Plan Competition, a contest I was eligible for as a V-WISE graduate. The competition required me to pitch in front of not only an accomplished panel of judges, but also the entire V-WISE audience. I won first place in the competition and was ecstatic.

Then one fateful day in May, I received e-mails from six different people whom I had met through V-WISE: “SUBJ: SHARK TANK IS LOOKING FOR VETERAN ENTREPRENEURS.”

Why not? I thought. It couldn’t hurt.

As an entrepreneur, appearing on Shark Tank was never a goal. My goal has been to transform TurboPUP into a success. But Shark Tank is a very important step toward achieving that goal.

Right now, TurboPUP is more like a TurboPUPPY. It’s still a baby, but it’s been nourished and supported by so many serendipitous events that I am infinitely astonished. As my Shark Tank airdate looms on Friday night, I’m trying not to panic. But no matter how things turn out, being able to share the experience with V-WISE and the people who have inspired me already makes me feel like a Shark Tank success story.

To view Kristina’s appearance on Shark Tank, tune in to your local ABC channel on Friday January 16th at 9ET/PT.