Honorably discharged veterans of all eras can now apply for a new veterans ID card, officials with the Department of Veterans... 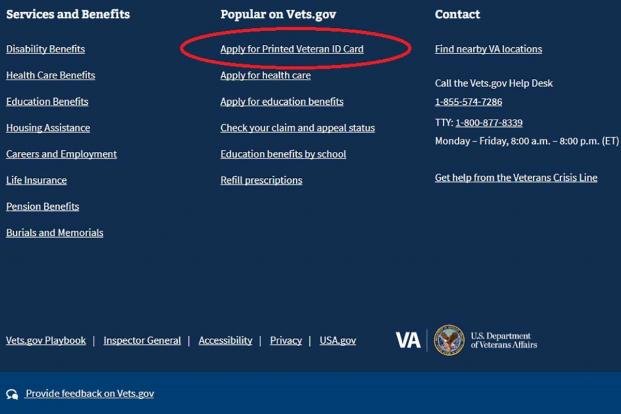 Honorably discharged veterans of all eras can now apply for a new veterans ID card, officials with the Department of Veterans Affairs said Wednesday.

To receive the card veterans must log in to Vets.gov using either the ID.me verification system or a DS log-in. Users will then be able to apply for the hard-copy card by verifying their personal details through the website and by submitting a copy of a valid government issued-ID as well as a shoulders-up photo to the site.

Once the application is complete, users can expect to receive their new ID card within 60 days,officials said in a release. Officials said users will also be able to receive a digital copy of the card by mid-December.

The link for the application is found at the bottom of the Vets.gov homepage under the words “Apply for Printed Veteran ID Card.”

After multiple failed attempts and error messages, reporters with Military.com were able to fully test the new application system and request an ID card using their own VA log-ins and military service credentials.

Among those errors was a message that said the VA was unable to confirm that the reporter served in the military, despite the fact that the reporter actively receives VA benefits. A separate error incident blocked the reporter from submitting his uploaded government-issued ID card or ID card photo.

The ID cards are meant to offer a way for veterans to prove their service without carrying a copy of their DD-214 form, which contains sensitive personal information, such as veterans’ Social Security numbers. The new IDs will not, however, qualify as official government-issued identification for air travel or other uses. The ID card program is voluntary.

The VA was ordered to provide the cards in a law passed by Congress in 2015. Some veterans, such as those who receive health benefits from the VA and military retirees, already have IDs that can provide proof of service.

An early prototype of the card provided to the veteran service organization AMVETS by the VA shows the VA logo on the front and an Office Depot logo and advertising message on the back. Although VA officials said the design of the card is still being finalized, the Military.com reporter who successfully tested the system was shown a copy of an ID card. That ID card example did not include an Office Depot logo.

VA officials told Task & Purpose last month that Office Depot is printing and providing the cards to veterans for the VA free of charge, but a spokesperson with Office Depot was not aware of the arrangement at the time, according to Task & Purpose.