Vet’s KISS roadie job ends: ‘So many doors open’ for me

We are so excited to feature this article.  Just a  few months ago we were promoting this “roadie” position for... 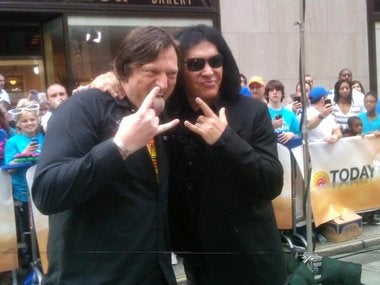 We are so excited to feature this article.  Just a  few months ago we were promoting this “roadie” position for veterans to apply!  Great things are happening for our Vets and we are so proud to see these rock stars supporting them!

Paul Jordan, an Army veteran who served in Iraq and Afghanistan, won a job with KISS as part of TODAY’s Hiring our Heroes series. He’s writing dispatches about his experience for TODAY.com.

The lights have dimmed, the amplifiers have cooled and the confetti has fallen. The tour has ended.

KISS played in 44 cities including Toronto, Mexico City and Monterrey. I helped set up and tear down 17 tractor-trailers worth of gear in every location.

It was a grueling job — and I loved every minute of it. And it actually had many similarities to my military life.

I started each day early. I was part of a team given a specific task, which was overseen by a senior staffer. He reported in the chain of command to the production manager, who answered to the band.

We worked until the job was done. After the show, all of the gear had to be packed back into the trucks in an orderly way. This was completed meticulously so that it would all fit. Only when everyone was finished could I take a shower and get on the bus to drive to the next city.

It’s similar to the average day for a soldier: early mornings, teamwork with a collective goal, a chain of command and everyone working until the job is complete.

The two worlds collided when the tour production team raised more than $51,000 for Operation Resilient Warrior, an organization that supports military service members, veterans and their families. It was an incredible feeling to give back to the military community.

I had trouble integrating back into society after retiring from the Army two years ago. It was difficult for me to relate with civilians, especially when struggling with PTSD. I was often frustrated and depressed during my ordeal with unemployment. It seemed as if society wanted me when I was serving, but didn’t want me when I was done. Life was going nowhere for me.

I couldn’t believe it when I received the call to interview for the KISS roadie job. It was the first response I heard in months.

I’d like to thank Hiring Our Heroes, who helped set me up with this opportunity. They didn’t stop with me: they help veterans and separating service members find jobs every day.

I know now that life exists after military service. You just have to find something you’re passionate about and go get it. There is a world of opportunity out there.

And there are so many doors open in front of me now.

Hiring our Heroes is an initiative from NBC News and the U.S. Chamber of Commerce that aims to get veterans back into the workforce. Find a list of upcoming job fairs here.
Full link can be found:  Courtesy of the Today Show Hiring Our Heroes Program