By J.G. Noll Over the weekend, it appears that Forever 21 either sold out of–or removed–items from their Army PT... 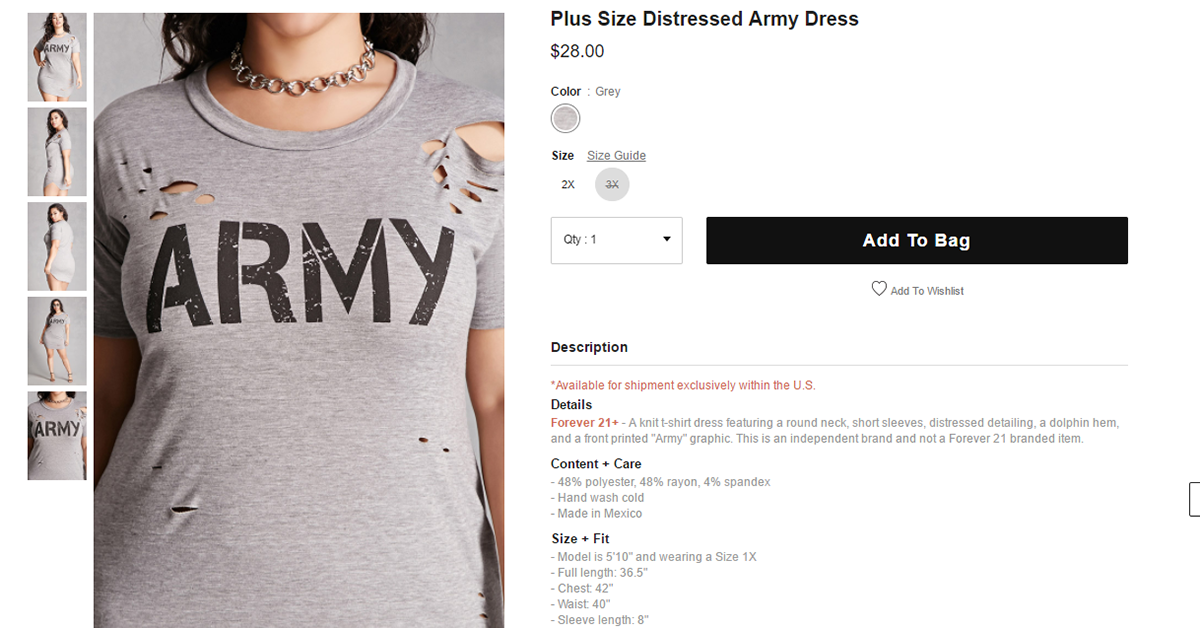 Over the weekend, it appears that Forever 21 either sold out of–or removed–items from their Army PT line that we reported on last week. Popular blogger, Army Wife 101, first noticed the missing pieces on Saturday morning.

The PT line–which is not the official name for the line–surprised, amused, and even angered some in the military community. While most readers found it ridiculous that any clothing line would charge $40 for a PT shirt, some took umbrage with the way one particular piece was sold.

On the page featuring the Army Choker T-Shirt Dress, Forever 21 had posted: “Now you can sneak out of his barracks in style!” Both female veterans and military spouses alike found the marketing distasteful. Some readers pointed out that Forever 21 was reinforcing a stereotype about military significant others without truly understanding it’s ramifications, while also completely ignoring female service members’ contributions to the Army.

(Update, May 6, 6:11 AM: It has come to our attention that the photo referred was not a direct screenshot from the Forever 21 website but a screenshot of a widely circulated screenshot that could have been altered.)

Meagan, a veteran who posted on MilitaryOneClick’s Facebook noted,”Needless to say this servicewoman will never be shopping at your [Forever 21’s] stores again. Way to completely disregard female service members, disrespect us and perpetuate negative stereotypes about us and military significant others.”

At the time of publication, most of the PT-style shirts and dresses that were originally available on Forever 21’s website had been removed. Currently, the Plus Size Distressed Army Dress, retailing for $28, and the Distressed Army Hooded Dress, originally retailing at $35 but now being sold for $24.50, are the only two PT-inspired items visible on the site. There are other Army- and military-inspired items for sale, including camo bathing suits and and jumpsuits.

We have reached out to Forever 21 to clarify their marketing and design choices, as well as the missing PT-inspired products.