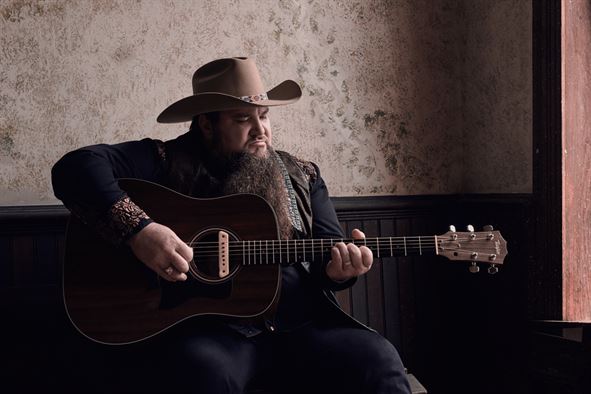 Sundance Head, the winner of NBC’s “The Voice” season 11, is ready and eager to bring his original soul country music to Air Force audiences.

As part of its initiative to bring quality entertainment to Airmen and their families, the Air Force Services Activity was just as eager to sign the Texas music artist to a 10-base tour.

“When Sundance Head won ‘The Voice’ in December, we started to arrange for him to play on Air Force bases,” said Jeri White, the AFSVA entertainment program manager. “We selected him because we felt he would appeal to a majority of people, including our younger Airmen.”

Head’s career has taken off after his victory on the singing competition. He toured with his on-air mentor and country music star, Blake Shelton over the winter. In June, he won the Texas Regional Radio Association award for best new male vocalist and had his first No. 1 hit on the Texas charts with “13 Years,” a song he wrote for his wife, Misty; and he played the “mother church of country music,” the Grand Old Opry in Nashville, Tennessee, with Shelton.

“We’re going to come into town, and, hopefully, we’re going to provide one of the best concerts they’ve ever seen. That’s always the goal. We’re just a three-piece band. We just play real music with real instruments. We don’t have anything looped, don’t have anything tracked. We just want to come play real music for a bunch of really amazing people. We can’t wait, so come see the show,” Head said.

Head said he and bassist, Dropkick Dave Walters and drummer Big Joe Busa are thrilled to be playing for and meeting Airmen and their families.

“Mostly, I just really want to meet our Airmen and shake their hands and thank them for everything that they’ve done for America. That’s the most important thing to me. It’s not about me — I understand that, and I want them to know that, too,” he said.

Head credits Misty with coming up with the term “soul country” in an effort to get his original music played on the radio and attract booking agencies. Since “The Voice,” he said, “Suddenly there are soul country singers all over social media.”

“For me, it’s just writing really cool songs and singing everything from the depths of your soul and giving your whole heart to every lyric.”

Head, who is from Porter, Texas, became an “overnight success” through resiliency, honing his craft and making a living performing in Texas. But what he wanted to do was make an impact on music, so he took a chance and tried out for “The Voice.”

“I felt like we had put in the hard work in Texas to make sure we had the stage presence and relatability to the audience that you really could only have perfected through hard work and many, many hours of singing in bars large enough for only 10-15 people, or sometimes only to my wife running sound,” he said.

Head’s tour will include bases that are more remote and isolated, she added.

“Airmen stationed there do not have the same opportunities for entertainment as those stationed in or near metropolitan areas. Another consideration in selecting bases for tour stops is logistics. The concerts should be grouped geographically and fit in with the entertainer’s concert schedule,” she said.

“We are hoping the Air Force tour will be a great experience for him and the installations, so we can send him out to more locations. We encourage bases to give the entertainers a look into our world, a glimpse into an Airman’s life and our different career fields. Once the artists experience it, they’re hooked on performing for the Air Force because the bases welcome them into the Air Force family,” White said.

Other upcoming entertainment tours from AFSVA are with illusionists Mike Super and Jason Michael. Super is touring 18 locations in July and August and Michael is touring in September and October. Both provide family-friendly shows, which have been well-received at installations previously, White said.