We Can Thank WWII For These Christmas Traditions

My favorite Christmas movie is White Christmas for so many reasons, but one of them is because of the World... 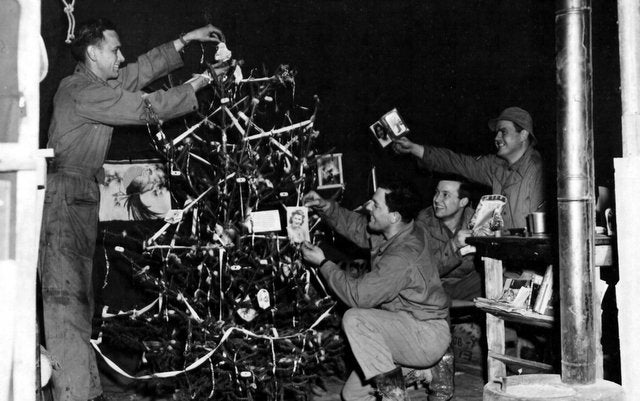 My favorite Christmas movie is White Christmas for so many reasons, but one of them is because of the World War II overtones. I’m a sucker for a good war movie, and my favorites are all WWII-related.

When combining military traditions and Christmas, I get absolutely giddy. The traditions that I grew up with and the ones I pass along to my children come from great stories of the many families that came before us. And a lot of them can be tied to World War II.

Shortages during WWII made for some very creative times. Some of the more obvious changes in that time were on the Christmas tree. While the Christmas tree stems from German tradition, it was adopted in America only after Queen Victoria had one in 1846. By the 1890s, the popularity of Christmas trees was on the rise in America.

Originally decorated with ribbons, bows, and glass ornaments from Japan and Germany, the decorations drastically changed during the war. One of the light bulb companies in New York began making glass ornaments, which were placed on trees during the war. The material used for ribbons and bows also changed due to shortages. Families were encouraged to make their own ornaments, using cut-out patterns, from whatever material they had available.

One of the biggest changes was the introduction of the artificial Christmas tree. Again, borne out of necessity and a shortage of lumber, the artificial tree has gained popularity with those who live in more tropical climates, have allergies, or prefer to minimize the mess of a live tree.

The idea of shopping early for Christmas was virtually unheard of before families were worried about overseas shipping to war zones. As we see each year, the USPS has a deadline for when packages must be shipped to guarantee arrival for Christmas. This is certainly one tradition that has been passed down among the generations of military families.

As America moved away from European influences regarding Christmas, it became more noticeable in some areas, such as Santa. Jolly old Saint Nicholas became much more American looking through the years of World War II, a look which he has maintained since.

Some of the most popular Christmas songs were written during WWII, the most memorable being “I’ll Be Home for Christmas” which immediately became a favorite among those missing their loved ones throughout the holiday seasons. Other classics including “Baby, Its Cold Outside” and “Let It Snow” were popularized after the war as they were written into war movies produced afterwards.

As the service members of WWII returned home, their families introduced some of these new traditions to them, which have worked their way through the generations to us today. While today’s military faces years of war, I am comforted knowing that the Christmas traditions that we uphold, even when separated, are firmly rooted in the strength of military families from years ago. It gives me hope that the things we do today will be carried on, and that the traditions of the military and America will strengthen with time.