In 1932, Benjamin O. Davis Jr. entered the U.S. Military Academy at West Point, only to be silenced by... 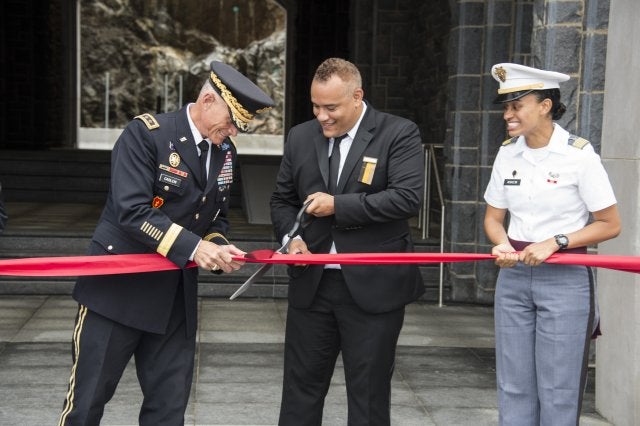 In 1932, Benjamin O. Davis Jr. entered the U.S. Military Academy at West Point, only to be silenced by the Corps of Cadets. Eighty-five years later, USMA has payed homage to Davis’ legacy with the dedication of the newest, most innovative and eco-friendly barracks in his memory. On August 18, the U.S. Military Academy superintendent, Lt. Gen. Robert L. Caslen Jr., along with West Point cadets, staff and faculty, and members of Davis’ family, cut the ribbon to the barracks that stands tall above the rest.

“General Benjamin O. Davis Jr. exemplifies the West Point values of Duty, Honor and Country, and he exemplifies what it means to be a leader of character,” Caslen remarked. “We will dedicate this new cadet barracks that bears his name … etched in stone as a perpetual reminder of his incredible legacy and example that will inspire all future leaders of character that pass through West Point’s gates.”

Despite being silenced during his four years at West Point, where no cadets, faculty or staff members befriended or spoke to him except on an official basis, he persevered to become the fourth African-American to graduate from West Point, ranking 35th in his class of 276.

While he continually faced segregation and discrimination throughout his career, Davis was instrumental in developing the integration plan for the U.S. Air Force and went on to become the first officer to graduate from the Army Air Corps’ all-black flight training program, the Tuskegee Airmen. His awards include the Silver Star, Distinguished Flying Cross and Air Medal for meritorious service and gallantry. In 1970, Davis retired from the Air Force as a lieutenant general.

Twenty-eight years after retiring, in 1998, President Bill Clinton recalled Davis to active duty for one day to promote him from Lt. Gen. to General, noting that he was “the very embodiment of the principle that: from diversity, we can build an even stronger unity and that in diversity we can find the strength to prevail and advance.”

While Davis passed in 2002, his legacy lives on through his family, and now through the Davis Barracks, a monument that cadets will forever look up to, both literally and figuratively.

“He continues to show us the importance of Duty, Honor and Country, as cliché as that may sound, he embodied every pillar that the U.S. Military Academy and the Air Force wants to show and employ,” Cadet Brittany Scofield remarked. “He put duty above everything and I think that’s really important for us as cadets to remember. He didn’t let the circumstances or the adversity or the obstacles bring him down, but rather he put them in his stride and it made him stronger.”

“This is someone who said no matter how many times my back is against the wall, I’m going to continue moving forward,” he said. “That amount of strength, that amount of drive, that amount of grit, is necessary for anyone or any person at the Academy.”

Moore went on to explain that Davis’ circumstances only made him stronger.

“He had to go through being racially isolated and only being talked to during duty, never being eaten with, and he never had a roommate,” Moore explained. “To understand that there may be a time where your situation is not what you want it to be, but you will not let it dictate your future.”

“West Point is a challenging enough environment as it is, and honestly when I think of General Davis, I think there’s no excuse to not do the best you can because he excelled here, under much tougher circumstances than me to any other cadet here today,” he said. “It’s really just an inspiration every day to work and grind and not lose sight of the fact that you can excel here … you can do the best you can, and that’s what’s expected of you.”

Brinson said that Davis gives hope to others that anything is possible.

“Gen. Davis’ story just fits into the greater arc of what the American dream is and the reason we’re all here, and why we all fight for the country that we love,” he added.