What does the sequester mean for you?

Courtesy of our guest blogger,  Sarah Peachey Sequester. We’ve been bombarded with this word for months. As I write this,... 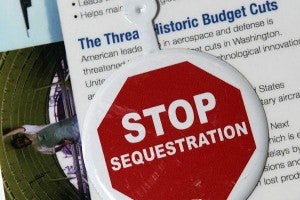 Sequester. We’ve been bombarded with this word for months. As I write this, I’m watching the news, still hearing what this word means for our nation’s future. It sounds scary. As part of the Budget Control Act of 2011, more than $1.2 trillion in automatic spending cuts will go into effect over the next ten years if Congress doesn’t offer an alternate solution. At least $85 billion would start this year. These cuts impact government programs across the board, from transportation to benefits. These cuts don’t necessarily mean danger for the USA — we can tighten our belts, stop money going to programs we don’t need to fund and figure out a way to deal with it.

The biggest question most military families ask is this: What does sequester mean for me? Unlike civilian families, we can be hit on two sides — the civilian sector of cuts and the defense cuts. Sequester will hit the defense budget hard, with almost half of the $85 billion coming directly out of the Defense Department’s budge. While some cuts are likely beneficial, a lot of the cuts aren’t focused on waste.

Chief of Staff of the Army Gen. Ray Odierno said Tuesday that, “On our installations, civilian furloughs, a 70 percent reduction in base sustainment funding and an elimination of contracts will strain our ability to protect our Army family programs. If sequestration is implemented, we’ll be forced to reduce funding for our schools, our daycare centers, family assistance and community service programs, family and substance-abuse counselors and tuition assistance for our Soldiers.”

The major cuts would include things like possible base closures and reduction in operations, reduction of military training by 80 percent (except for deploying units), delay of maintenance for ships, suspended ship deployments and aircraft flying hours and the delay of maintenance for ships, aircrafts, vehicles and facilities. These are things the military has already prepared for and anticipated when the discussion first began. These cuts also mean there would be reductions in contracts and forces, including reserve and guard components.

What about the cuts that directly affect our military families? Family programs won’t be safe. Some may be cut or entirely eliminated. Odierno said they would try to save the programs that are most important, but all entities face cuts. The family programs at risk include, Army Family Action Plan, Army Family Team Building, Mobilization and Deployment Readiness, Employment Readiness, Exceptional Family Member Program, Family Advocacy Program, Financial Readiness, Soldier and Family Assistance Center and Survivor Outreach Services. Not to mention the people who work for these organizations. Even if you aren’t associated with the Army, your branch’s equivalent probably faces similar cuts.

So far, the military health care system isn’t safe and could face $3 billion in cuts, which could affect your quality of care. Specific providers, like mental health experts and counselors, may not be available due to smaller staffs. Our Child Development Centers could experience reduced hours and less available slots for care.

Chief of the National Guard Bureau Gen. Frank J. Grass said annual dental checkups and physicals for reserve-component Soldiers, about 115,000 people, would be affected. The National Guard would also suffer a backlog in military schooling, maintenance issues and lack of readiness.

About 251,000 Army civilian employees will be furloughed one day per week without pay under the sequester. The furloughs would begin mid-April and last through September. At least 31,000 temporary and term employees have been terminated in preparation of sequester, not to mention the hiring freezes in place for the last two to three years.

I don’t share all this to scare you. This is to help you realize what is at risk. We need to prepare to tighten our belts and go with these changes. We need to prepare our families for it. We need to prepare our household budgets to keep some extra money stowed — all of these things “just in case.”
I don’t believe sequestration proposes a national threat. Our service members are still prepared to do their jobs. I, however, do believe these cuts will be tougher on our service members and their families than they are on the regular civilian population. Let’s face it — our service members don’t make that much and our benefits help to offset that. Any cuts to those things will affect the families as a whole.
If you’re nervous about cuts, look into them. It’s better to know what to expect and prepare yourself, rather than being blind-sided. A quick Internet search will bring up plenty of lists.

No one party, the president or government organizations, despite what you’ve been told, are to blame for sequester. This is the failure of people working together. They’ve spent most of the time blaming each other, rather than coming up with real solutions.

No matter what, we will all “adapt and overcome,” as they say. We will get through this, even if we need a bit of preparation.

Sarah Peachey is a 20-something journalist from the northeast and living in the Deep South at Fort Polk, LA. She began a career in journalism with The Fort Polk Guardian, an installation newspaper, winning two local awards for her work, and now freelances for military spouse support sites. She is an active blogger on MilitaryOneClick (www.milspousefest.wpengine.com) and her blog, “Stetsons, Spurs and Stilettos” (http://www.stetsonsandstilettos.blogspot.com). She enjoys spending her days on the shooting range or at home with a good book. She considers herself a bookworm, pianist, wine enthusiast and artist.