What happens if there’s an attack on your base?

What should military families living on base do if there’s a serious threat or actual attack? About 30 percent of... 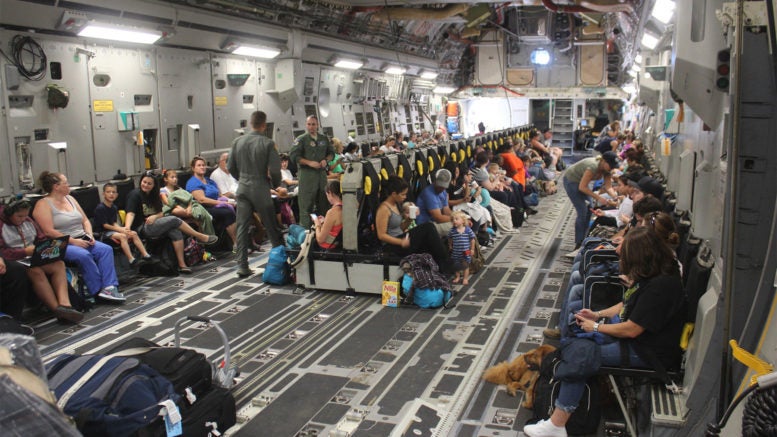 What should military families living on base do if there’s a serious threat or actual attack?

About 30 percent of the military’s more than 2.7 million spouses and family members live on bases worldwide, experts say. A recent statement from North Korea towards the U.S. territory of Guam, home to about 160,000 U.S. residents and about 13,000 troops and military families at two military installations, threatened an attack on the island. (In response Secretary of Defense Jim Mattis said in a statement that North Korea “should cease any consideration of actions that would lead to the end of its regime and the destruction of its people.”)

This still unfolding drama got us wondering: what’s the plan for military families in the unlikely case of a serious incident or an imminent threat to their base?

While it’s ultimately up to the commander of each base how their emergency system works, officials with the Pentagon’s U.S. Northern Command, which manages force protection issues, said every base is instructed the have a plan that can adapt to any threat – including the incredibly unlikely missile or nuclear attack.

“Installation emergency managers must develop and maintain a comprehensive, integrated all-hazard EM plan at each installation that is aligned with the five mission areas of prevention, protection, mitigation, response, and recovery,” according to the DoD’s emergency management directive to bases. “The [emergency management] plan must be flexible enough for use in all emergencies, including unforeseen events, yet detailed enough to provide an initial course of action for installation commanders to proceed with pre-planned responses to potential unexpected events.”

Families who have lived on bases know that officials regularly conduct emergency drills, often centered around an active shooter incident. They also know that bases often have broadcast ‘voice in the air’ systems that sound the alarm and spread instructions should anything happen. Those are typically tested regularly to make sure they are in working order, and also used by bases to broadcast weather emergency information, like tornado warnings. Officials on Fort Campbell, Kentucky, for example, told us that they also use a crises communication system via voice and text messages as well as social media to make sure any messages that need spreading get spread.

But at what point is a threat serious enough to prompt an evacuation? Assuming officials have an early enough warning, getting families and non-essential personnel away from the base isn’t out of the question, officials said. But when it happens, exactly, is hard to say. Every evacuation decision is coordinated between NORTHCOM and the base, Navy Cmdr. Patrick L. Evans, a Pentagon spokesman, told us.

Families sometimes really do get evacuated for natural disasters or otherwise. Although there hasn’t been a specific attack threat to a base, families in Japan were allowed to voluntarily evacuate several years ago during a meltdown at the Fukushima nuclear plant. And families stationed in Turkey were evacuated last year when the threat of terrorism in the region became too serious.