When you’re married to the all-in service member

I already knew I had an all-in soldier for a husband but, in that moment at the end of a... 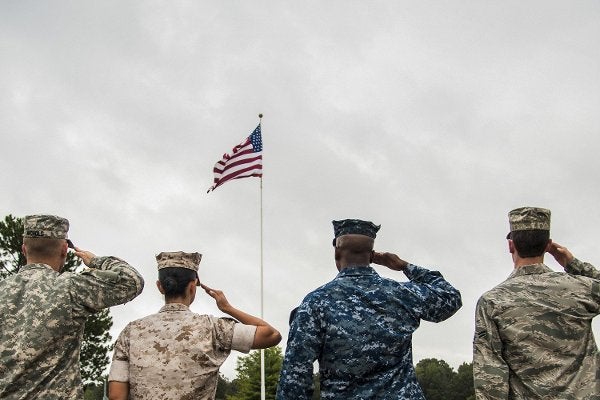 I already knew I had an all-in soldier for a husband but, in that moment at the end of a recent run together, I kind of hated it.

Maybe you’re married to that kind of service member too — the warfighter who strives to be the best of the best at everything, maxes the PT test every time and still follows all the bed-making, clothes-folding standards learned at basic training.

Before kids and the military were in our lives, my husband and I used to go for long runs just to chat. It was quality time that usually ended with ice cream and a favorite TV show — not exactly crazy workout sessions.

But once the military and a family entered our story, early morning PT became his primary time to work out, and I fit in exercise around everyone else’s schedule.

On this particular recent day, we decided to go for a long overdue run together.

As I laced up my shoes, I was about to remark on how nice it would be to relive our old runs, when he stuck in his earbuds and said, “I won’t be talking; I’m working on increasing my pace.”

“That’s OK,” I said, preparing myself for the pain his pace was likely to cause me. “I’ll do the same.”

We started off together, listening to our independent playlists.

When we faced hills, he attacked them with Army-like purpose as I managed to just keep up.

When I was forced to stop and fix my hair, he jogged in place and focused on his watch. Finally, as we approached the last mile, my stellar soldier surged ahead.

Despite what my heart wanted, my legs begged for me to quit.

I started to accept my fate as officially “smoked” when I had a thought: Our run was a perfect illustration of how we both had been shaped in vastly different ways by the military lifestyle without realizing it.

The military has a way of creating dynamic leaders who translate into fantastic role models at home.

My husband appreciates organization, routine and logical ways of finding solutions to everyday problems. He teaches our kids the values he loves about the military, including work ethic, respect for authority, loyalty and integrity, among others.

But the military has done something entirely different for me.

As difficult as it has been to constantly maneuver around his schedule, I have learned to embrace the role that creativity plays in chaos.

I have to fit in my own self-care — not because someone tells me to, but because it keeps me from losing my mind. My focus on relationships in our home is more likely to come before order, and they are definitely more important than perfection.

Leadership as a military spouse has become more about adaptability and keeping a strong “whatever” mindset, and less about the precision my husband strongly values.

I watched from a distance during our run as my husband finished and then checked his watch.

Shame washed over me as I thought about how frustrating it is to be married to someone who folds laundry better than I do, often thinks to start the Crockpot before I do, and is in better physical shape than I am.

It seems that the military has made a stellar leader out of him and a leisurely pace keeper out of me.

Unless you or your spouse quit investing in your relationship a long time ago, almost no one likes to be left behind.

In fact, if you’ve been married for any length of time, you — like me — have likely experienced surging ahead or lagging behind your spouse in one area or another.

What you do when you find yourself there, though, reveals the state of your true character.

Do you finish strong or just slow down in defeat? Do you give into the feeling of being “smoked” or power through to the end focusing on the strengths you do have?

As much as we try to experience things at the same pace, marriage will often ebb and flow throughout the marathon of life.

The military lifestyle almost guarantees we will each have different ways of approaching it. While each person brings different weaknesses, both also have something to offer when the moment is right.

My soldier husband’s strength and fast pace take the lead in some circumstances, while my more laid-back approach is what’s needed in others.

One thing was clear during our run: His pace challenged me to dig deep and find something new within myself or I risked falling permanently behind. So I finished while he waited on me.

And so it is in military life. Despite our different experiences, this lifestyle has taught us separately that the kind of battle buddy we are for each other is a matter of life or death for our marriage.

I’ve learned to finish strong even if it’s looks or feels different than I originally pictured.

My “all-in” soldier finishes strong and I, in turn, must do the same.