‘Where it all started:’ Museum highlights groundbreaking genesis of Army aviation

When thinking of Army Aviation, many people’s first thoughts turn to helicopters like the AH-64 Apache or UH-60 Black Hawk.... 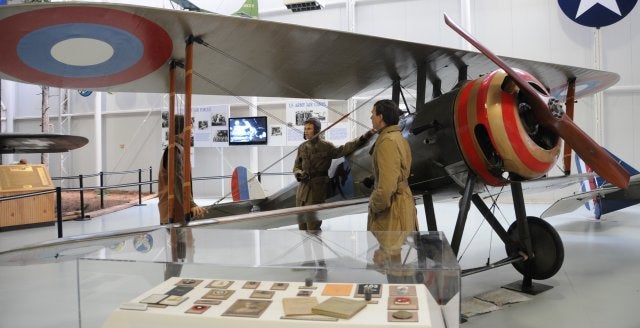 When thinking of Army Aviation, many people’s first thoughts turn to helicopters like the AH-64 Apache or UH-60 Black Hawk. But the story of Army Aviation didn’t start with vertical lift.

Army Aviation’s roots began with fixed-wing aircraft, and one of the most significant aircraft that had a lasting impact on the future branch was the Nieuport 28C-1, which was a French aircraft borrowed by the United States when the nation entered World War I in 1917.

The Nieuport 28C-1 was developed in mid-1917, but was rejected by the French Air Service as a frontline fighter, so it was given to arriving American squadrons and became the first operational pursuit aircraft in the U.S. Air Service.

When the U.S. entered World War I in 1917, the war had already been going on for a few years, so the U.S. didn’t have aircraft that could compete with others being flown in the war, said Barlow.

“We had to borrow aircraft, some from the British, but primarily from the French,” he said. “When the first squadrons deployed to France, they were given these aircraft to fly, and the Nieuport 28 is the aircraft that was used for a couple of very notable firsts in the Army Aviation.”

During the war, U.S. pilots had been in combat prior to the use of the Nieuport 28C-1, but it wasn’t until the use of the Nieuport that the U.S. saw its first aerial kill in American history by then-2nd Lt. Douglas Campbell of the 94th Aero Squadron on April 14, 1918, said Barlow. By May 31 of that year, he became the first air ace with his fifth kill.

The U.S. received 297 Nieuport 28C-1s from the French during the war, but only 88 returned to the U.S., including the one that sits in the museum today. That particular aircraft was not only flown during the war, but was also featured in the movie “The Dawn Patrol,” in 1938. After its movie debut, the aircraft fell into disrepair until it found its way to the United Kingdom in the early 1990s. It was then restored to full flying condition before finding its permanent home at the museum.

“It’s a beautiful airplane,” said the former aviator. “Airplanes of those days were creations of wood and fabric, and they looked flimsy, but they were stronger than you think.”

The Nieuport 28C-1 has a wingspan of about 26 feet and is 20 feet long, and features a 160-horsepower rotary engine that gave the plane the capability to reach speeds of up to 122 mph.

The engines of the time didn’t retain oil, so there was an oil tank that fed it to the engine, Then the engine, through centrifugal force, would lubricate the cylinders, and as the oil was used up it was blown out along the bottom. Stains of oil can still be seen on the aircraft where the oil was ejected through the bottom of the engine.

Additionally, the aircraft had one Vickers machine gun mounted over the engine, which was synchronized to fire through the propeller, with later models adding another gun, said Barlow.

“Army Aviation today is a ground support force, but in those days they did it all,” he said. “The early aviators of that time became the pioneers of the modern Air Force that started being built during the Second World War.

“These guys flew these things in France and did a fantastic job with them,” said Barlow. “They were only in action for about 10 months before the armistice was signed ending the war, but they did a lot in a very short amount of time, and this is the aircraft they did it with. We are standing on the shoulders of [these WWI pilots]. They did it when Aviation was in its infancy, so these guys were daredevils, they were brilliant and they were brave to do what they did.”