Why “Dependapotamus” Needs to End

In case you hadn't heard, being married to a service member isn't exactly sunshine and rainbows all the time. As a community of military spouses, we should be supporting each other both online as well as in person. 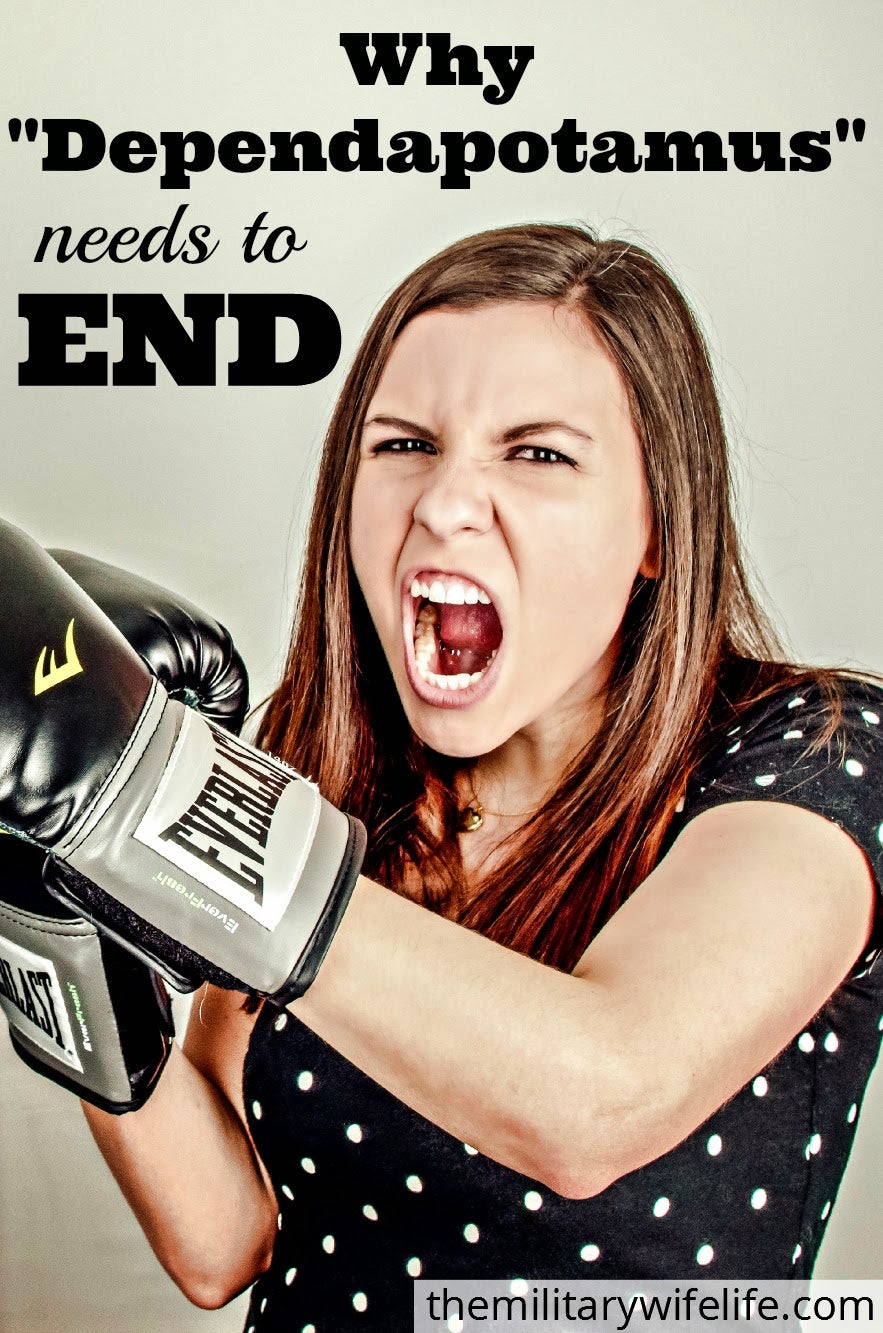 If you’re a military spouse, you’ve probably heard a few terms like Tag Chaser, WestPac Widow, OSMW (overly-sensitive military wife), and the infamous Dependapotamus. I know, I get it: drama is fun. Sometimes when us women get bored we like to sit around sipping margaritas (although I’m personally more of a mojito fan) gossiping about who’s cheating and who’s only in it for the bennies (the military benefits).

But ladies, these cruel terms and the bullying behind them need to END (along with that stupid gossipy drama crap).

While I haven’t personally been victimized, I’ve seen countless women being publicly shamed online for things like posting a picture of their new Army ACU purse, or even admitting that the military life isn’t easy. Why does a “Proud Air Force Wife” t-shirt make somebody a Dependa??

I don’t know about you, but I’m sick of stumbling across Facebook and Twitter pages that are aimed at making fun of military wives.

Now don’t get me wrong—I get why they exist. I understand that there really are women who marry service members for the benefits (although I’m not sure I’ll ever understand what’s so great about Tricare), and I know there are some pretty cruddy milspouses who really do cheat on their husbands when they’re deployed.

But that doesn’t justify the shaming.

Is it cool if I take it one step further?

And it definitely doesn’t justify shaming spouses who do NOT cheat, who are NOT in it for the benefits, and who are NOT lazy bums that do nothing but leach off their husbands.

Ladies, this needs to end.

What’s even more wrong about the milspouse shaming is that 99% of the time, it’s coming from other military spouses. Yes, even those nasty Facebook and Twitter pages were created by none other than our sister MilSO’s.

Boredom, maybe? (Which would be ironic because apparently those spouses have jobs, since they’re criticizing the ones who don’t.) Is it out of insecurity?

Whatever the reason, it needs to stop. All it does is tear down other military spouses when instead we should be building each other up. In case you hadn’t heard, being married to a service member isn’t exactly sunshine and rainbows all the time. As a community of military spouses, we should be supporting each other both online as well as in person.

Then why the hell would you call someone that online??

It’s estimated that suicide rates among military spouses and families are significantly higher than the rates among civilians, although the DoD has only recently decided to fund research on this (the decision was made in 2012 and they collected data throughout 2013 and 2014, so I suspect the results will be reported soon).

Do you really want to be responsible for someone’s death?

Military life is hard enough as it is, and the last thing these spouses need is getting called ugly names for having a “Navy Wife” bumper sticker.

If you’re a blogger, feel free to post about your own opinions and join our anti-shaming blog hop! I’m a college student, military spouse and home-maker who loves writing, art, and all things do-it-yourself. I hate sticky fingers and yellow lights that are too short, but I love tea, the color green, and that fresh feeling you get after you’ve just brushed your teeth.  You can find me at The Military Wife Life.