You can sit with us: A message for Meghan Markle, soon-to-be veteran’s wife

This is an opinion piece that does not necessarily reflect the views of MilSpouseFest. As I sat down to devour... 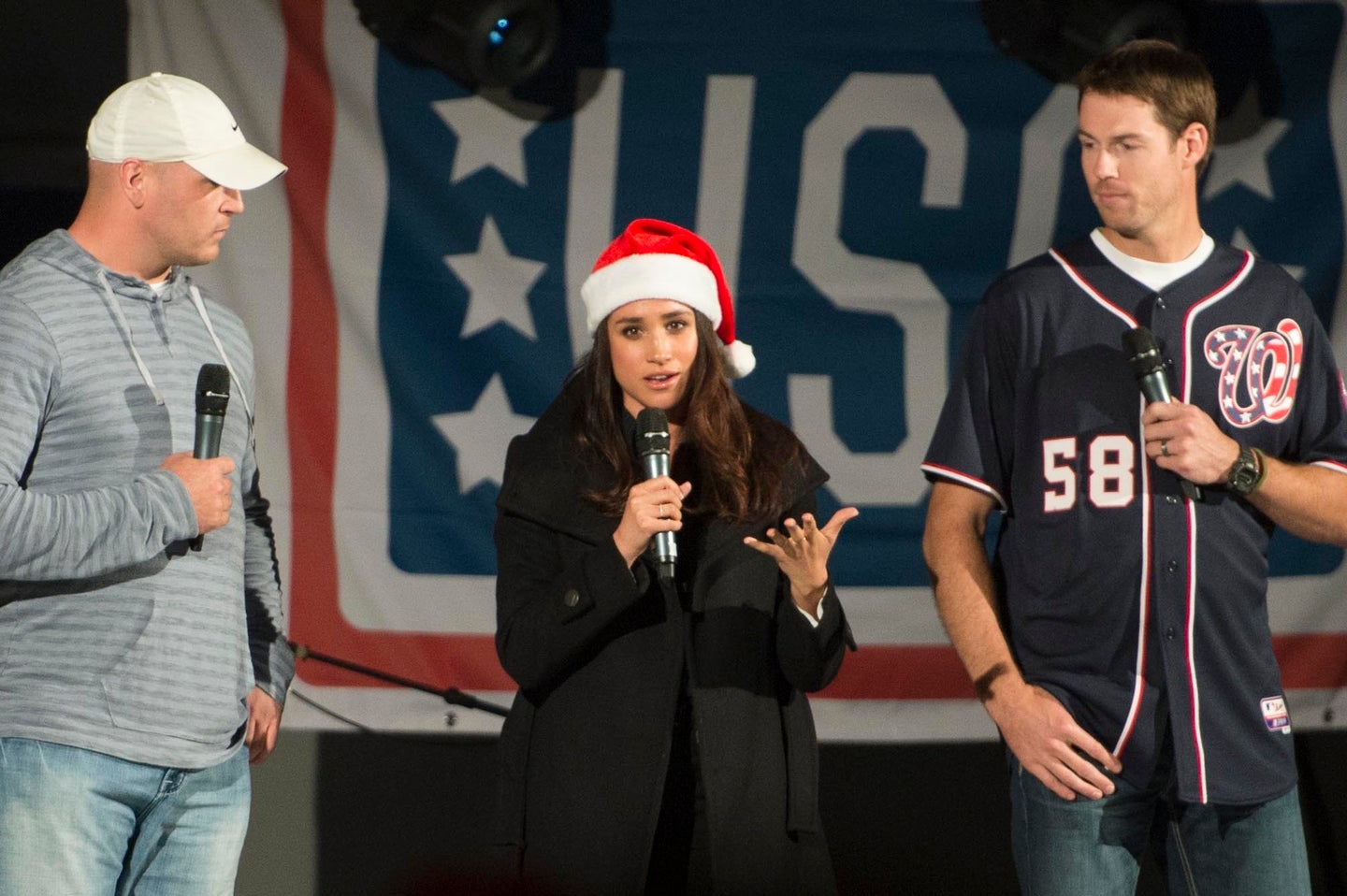 As I sat down to devour a plate of fried eggs, savory sausages, crispy bacon, and juicy grilled tomatoes in the hotel dining room, I looked up at a nearby television to catch a glimpse of Meghan Markle beaming at Prince Harry in Kensington Gardens. My husband and I just so happened to be in London on a family vacation the day the British Royal Family officially announced their engagement. Local news stations were in a frenzy over the story, playing clips of the pair together over and over.

Our sightseeing plans for the day included the Harry Potter Warner Brother Studios Tour, but all at once, I became focused on a different Harry altogether: A prince who had fallen in love with an American actress.

While my traditional English breakfast grew cold on its plate, I couldn’t help but get caught up in the drama and romance of it all. I pictured the glamorous dress, the jewels, the palace. The carriage, the ornate chapel, the polished groom in bright military dress.

As I looked across the table at my own soldier husband, I thought of all of the things the princess-to-be would give up for the man she loves– one whose life is dedicated to serving his country.

A veteran with a heart for his fellow service men and women.

Markle’s husband-to-be served in the British Army Air Corps for 10 years. He completed two tours of Afghanistan: One as a Forward Air Controller from 2007 to 2008 and another as an Apache Pilot from 2012 to 2013.

Before separating from active duty in 2015, Captain Harry Wales worked to facilitate celebrations and memorial events in London for the Army. His endeavors included launching The Invictus Games Foundation, which hosts an annual international sporting event with a mission to connect, empower, and inspire wounded veterans through athletic competition. As a matter of fact, Markle and her Prince made their first public appearance together at the 2017 Toronto event.

Meghan Markle may be gaining the life of a princess and all of the luxuries that come with it, but she will also be asked to make many of the sacrifices military spouses know all too well.

This successful, well-educated, career- and philanthropy-minded advocate for women’s rights will be asked to bravely place her husband’s duties above her own goals and dreams as he continues to put country before self. She has already closed her inspiring blog, The Tig, and said goodbye to her role of Rachel Zane on the popular TV series Suits. She was asked to make an overseas move in which she had to leave a beloved, aging pet who was deemed unfit for the Trans-Atlantic flight behind. From now on, she will be required to design her life around her husband’s duties and agenda.

While her marriage will certainly put her in a prime position to continue her global humanitarian work, she will also have to shift her focus from international charities like One Young World and World Vision Canada to efforts that re-align with the mission of the British Royal Family.

When the BBC asked how she feels about these sacrifices, she proudly replied, “I don’t see it as giving anything up. I just see it as a change.”

I’m right there with you, Ms. Markle.

Spouses of service members and veterans are no stranger to sacrifice and change, but the love we have for our husbands and wives gives us the strength we need to overcome the challenges we face together every day.

Of course, it wouldn’t hurt to have a castle and a royal title wrapped up in the deal. . . but, I feel comfortable speaking for the entire military spouse community when I say we’ll choose this life over and over again, palace or no.

Instead of dwelling on all of the things we have to leave behind, we, like Markle, dream up new ways to serve our world and communities right alongside our service members . We are also there to hold one another up, encourage each other and support fellow military spouses along the way.

On International Women’s Day in 2015, Markle said, “Women need a seat at the table, they need an invitation to be seated there, and in some cases, where this is not available, they need to create their own table.”

I’m happy to say the military spouse community has created its own table for camaraderie, support and inspiration. And, hey, Meghan? You’re welcome to sit with us any time. (When you join us, we just might serve a full English breakfast in your honor.)

Congratulations to you and Prince Harry. May you continue to humble and inspire us with your service to military families and veterans around the world.