You know you’re a Marine spouse when…

While all military spouses have a certain degree of strength, pride, and creativity, Marine spouses are a special category. We... 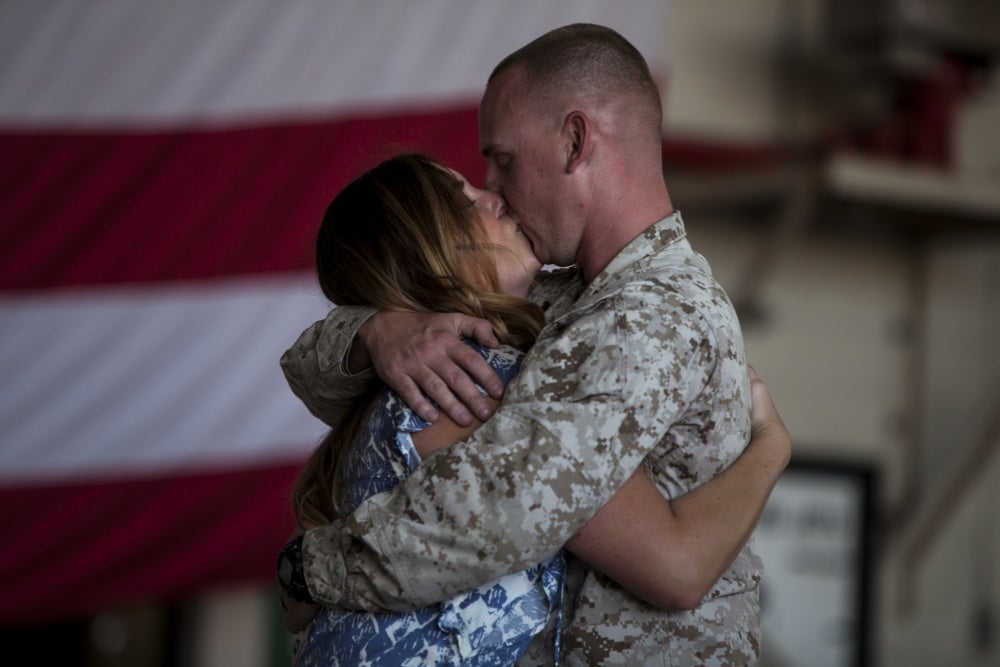 While all military spouses have a certain degree of strength, pride, and creativity, Marine spouses are a special category. We asked Marine wives what makes their life unique and got some hilarious results. Interestingly, no one mentioned having tons of children and Coach purses. Instead, this is how Marine spouses describe themselves, in their own words.

You know you’re a Marine spouse when. . .

. . . you know it’s a cover, not a hat. It’s a rifle, not a gun. Women are females. The bathroom is the head. A piece of paper is a chit. They are Marines, not soldiers!

. . . .you have searched for a barber shop on a Sunday night, then ended up giving your spouse a haircut.

. . . you only know your spouse’s friends by their last names.

. . . you know they are proud to be called a Jarhead, Leatherneck, or Devildog, but would hate to be a POG.

. . . .you give up the bedroom closet because they have to hang their uniforms.

. . . they have practiced MCMAP moves on you before their test. . .  and accidentally hurt you.

. . .. your license plate is a different state from the registration. . . which is different from your driver’s license.

. . . you know the Marine Corps Hymn and it gives you goosebumps every time.

. . . you always stand for the anthem and it angers you to see people who don’t take it seriously.

. . . during a deployment, your kids or your dog have gone running up to a stranger in uniform.

. . . .you know how your spouse smells after weeks without a shower. . . and you have hugged them anyway.

. . . you’ve been asked to wash cammies in the middle of the night.

. . . you get to celebrate their birthday twice a year. (Once the day they were born and once for the birth of the Marines.)

. . . you have felt like you were choking your spouse as you struggled to close the collar of their dress blues.

. . . you wander through a government building searching for a female head (bathroom), because literally no women work there.

. . . the laundry comes in two colors: Green and tan. Both smell horrible.

. . . you have avoided the commissary on a pay day.

. . . your spouse or friends own at least one of the following: A motorcycle, a pickup truck, a Dodge Charger, or a Mustang.

. . . the town around your base is full of tattoo parlors, pawn shops, liquor stores, dry cleaners, barbers, and strip clubs.

. . . you are a seasoned spouse who saw them in silkies back in the day.

. . . you know your spouse’s social security number better than your own.

. . . you have gone shopping for a gown (or suit) for the Marine Corps Ball.

. . . you have learned to recognize rank by the chevrons and have seen your spouse run away when a shiny one is coming.

. . . you check all 1,582 pockets of the cammies before washing them but somehow miss a pen and ruin the whole uniform.

. . . you stay up checking your phone every hour while they are gone.

. . . most of the mail is from your spouse’s friends in the barracks, who apparently find it easier to have their boxes shipped to your address.

. . .people think you know top-secret information, but you don’t even know when your spouse will be home.

. . .you had your prenatal care at an Army base and delivered all your children in Navy hospitals because the Marines don’t have their own hospitals.

. . . they have gear in every closet in the apartment, but you aren’t allowed to move any of it.

. . . you can’t watch a war or military movie without seeing tons of mistakes and errors. And your spouse keeps interrupting to correct characters’ uniforms.

. . . the metal rank pins and backings are scattered around the house.

. . . you use a Sharpie to touch up the rank pins because the brass starts showing through.

. . . you have helped your spouse roll their sleeves over their biceps . ..  or you have played tug of war to get them off!

. . . Daylight Savings makes you giddy, because “sun’s out, guns out!”

. . . they deploy and everything breaks.

. . . you have helped check off a gear list for a training exercise.

. . . you know how to field-strip an MRE or roll clothes to make them fit in a pack.

. . . you have tasted an MRE, and commented that it wasn’t that bad, only to receive a death stare from your spouse.

. . . everyone you meet on base sells LuLaRoe, It Works, Plexus, Scentsy, Posh, or Thirty-One.

. . .you always have beer in the fridge to welcome them home from a field op.

. . . you’re in a dual-military relationship and your spouse turns in your clean CIF gear instead of their own dirty gear.

. . . your spouse receives a K-bar for excelling in a class.

. . . you have used said K-bar to make peanut butter sandwiches on a camping trip.

. . . you move across the country into a new house, and the Marine Corps immediately takes your spouse to train for a few weeks.

. . . your Thanksgiving and Christmas guests are all single Marines from the barracks because their families are far away.

. . . you can’t remember all your past addresses and zip codes.

. . . your spouse wants an LOI for their child’s birthday party.

. . . no one from any branch looks better in a dress uniform than your spouse does.