Your service member survived. Can your marriage?

After 15 years of marriage I  never expected I would have to entirely change the way I communicate with my... 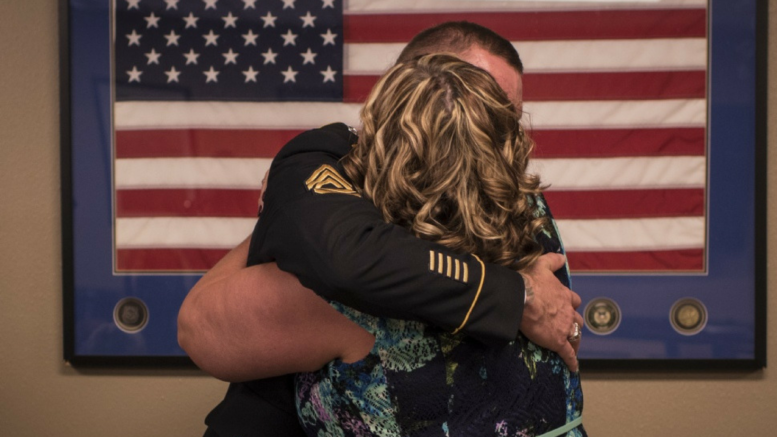 After 15 years of marriage I  never expected I would have to entirely change the way I communicate with my husband — the way I argue or debate, talk and compromise. They say good communication is the foundation of a good relationship. Now I had to learn it all over again.

Eight years ago my husband suffered a moderate Traumatic Brain Injury. Yes, he walked away. But because of it the way we share who we are and what we are feeling had to change.

That’s because PTSD causes someone to always have their temper at a slow boil, when people without it are not even registering any sort of annoyance. Overreactions of rage are super common. And TBIcan make someone cranky if they are getting over stimulated by sounds, people or visuals. It can be hard to tell where the symptoms of PTSD or TBI stop and the symptoms of the other begins.

How will your marriage survive TBI and PTSD? Start with patience and a willingness to change.

You will learn to change how you fight

All couples fight at some point, let’s be honest. When I am angry about something, I like to state my point of what is bothering me, address it and resolve whatever it was. I hate conflict and I like going to sleep with peace.

But now if my husband is really angry to the point of yelling, it can really escalate fast to a point where we aren’t getting any discussing done. The dog runs and hides under the bed when his voice raises. Two people yelling means two people aren’t listening to each other.

I admit, I am a fast-speaking Yankee from upstate New York. When I am mad, my rate of speech goes faster. But his brain injury caused hearing problems. So if I talk too fast, he isn’t going to pick any of what I said. I have to remind myself to talk slower and calmly.

He also doesn’t have a short term memory. So if you try to talk when he is talking he will get angry and forget what he was trying to say. That then adds to the anger that was there at the start of the argument.

I have started using words that always cracked us up when we were dating to help us both calm down and redirect our thoughts. I will say “can we talk about this in a few minutes; I need to calm down a bit.” I don’t tell him to settle down, as anything like that is fuel to the rage fire. I would resent hearing that, too.

After one such cool down, he walked down the hallway smiling, and told he was ready to go to Home Depot. Mentally, I was still angry and wanted to get the fight done with. He was smiling and I couldn’t remember myself what the start of the argument was about. So off we went.

You will learn that being right isn’t always necessary

He knows he has a brain injury and his self-esteem suffers because of it. If he is trying to make me watch a movie I have seen three times, I will calmly remind him I have seen it, but would like to watch something else with him.

When you’re tempted to want to be right, think of the reason for your disagreement and try to calmly, non-emotionally talk about those issues. Getting too emotional makes him annoyed. Many people don’t want to hear emotional speeches when they are mad. If anything, it can make it worse.

It probably isn’t about you

I have learned when I see him angry most of the time it isn’t even directed at me. Most of it is internal frustrations. He hates when he can’t remember names or words or people. He hates stuttering in public. He gets angry with himself when his leg collapses on him.

I used to hear the growls and yells and take it personally.

I think of the phrase a counselor told me about once called HALT – which means hunger, anger, lonely, and tired  — all feelings that impact our tempers.

Is he hungry? Hanger is serious for me. I am seriously cranky when I need to eat.

Is he angry about something before I even walk in the room? Lonely? Is he not feeling appreciated and cherished? Tired? That is a static constant for most of us. Nightmares wreck his sleep every night. I think he lives on a combined five hours of sleep — and so do I. It sucks.

Traumatic Brain Injury and PTSD can make the dynamics of couple hood a challenge. By stopping yourself before you react and take a deep breath and really look at what is making your partner angry, you can dissipate a lot of arguments.

I wish I knew this eight years ago.