A man used a 5-foot narwhal tusk to confront the London Bridge terror suspect, according to an eyewitness in Fishmongers' Hall, a building at the north side of the bridge where the attack began.

On Friday afternoon, two victims were killed and three were injured by the suspect, who was wearing a fake explosive vest, law enforcement said. The suspect was shot and killed by police.

Writer and director Amy Coop tweeted what she witnessed at the scene: "A guy who was with us at Fishmongers Hall took a 5' narwhale [sic] tusk from the wall and went out to confront the attacker."

In a video of the attack a man can be seen wielding a large white pole, which according to Coop is a narwhal tusk. Narwhals are whales that live in the arctic waters around Canada, Norway, Russia, and Canada. Their tusks are actually an enlarged tooth that can be up to 10 feet long.

Man tackled on London Bridge before being shot dead by police youtu.be


"We were trying to help victims inside but that man's a hero," Coop continued. 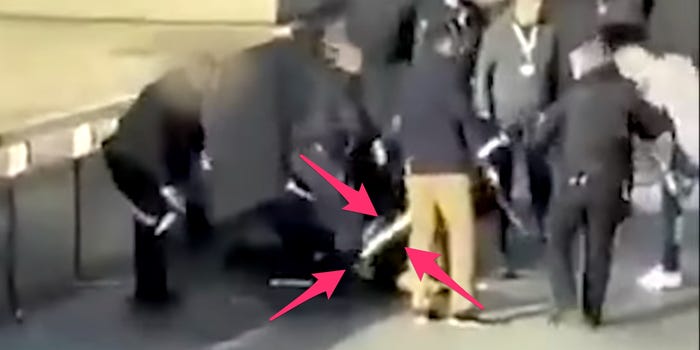 The man with the tusk was not alone in confronting the suspect; according to The Wall Street Journal the suspect was being moved away from Fishmongers' Hall by "three or four other men, one of them brandishing a fire extinguisher."

Footage on social media appeared to show several people holding the man down, and one civilian emerges carrying a large knife, having allegedly disarmed the man.

The civilians were were hailed as heroes by Prime Minister Boris Johnson and London Mayor Sadiq Khan, who praised the "breathtaking heroism of members of the public who literally ran towards danger."

Neil Basu, assistant commissioner with the London Metropolitan Police, said that officers and emergency services responded to reports of a stabbing at about 2 p.m. local time near London Bridge.

He said that one man was shot by specialist officers from the City of London police and died at the scene. Basu said the man was wearing a "hoax" explosive vest and he could "confirm that it has been declared a terrorist incident."

"I must stress we retain an open mind as to any motive," he said. "It would be inappropriate to speculate further at this time."

In an early Saturday morning update from police, Basu identified the suspect as 28-year-old Usman Khan.

"This individual was known to authorities, having been convicted in 2012 for terrorism offences," according to Basu. "He was released from prison in December 2018 on licence [sic] and clearly, a key line of enquiry now is to establish how he came to carry out this attack."

The names of the victims were not released by police who said that, a man and a woman were killed and "three others – a man and two women – were also injured and remain in hospital."

"The circumstances, as we currently understand them, are that the attacker attended an event earlier on Friday afternoon at Fishmonger's Hall called 'Learning Together'," Basu said. "We believe that the attack began inside before he left the building and proceeded onto London Bridge, where he was detained and subsequently confronted and shot by armed officers."