Of the 92 percent of the crew that has been tested, 447 have tested positive for COVID-19. The Navy is awaiting results for 775 sailors and 339 have yet to be tested. 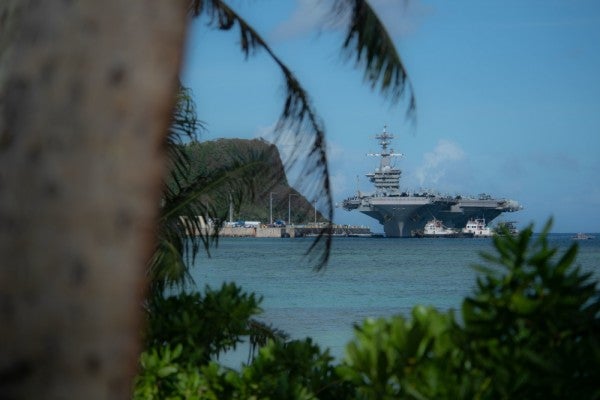 Almost 10 percent of the crew of the aircraft carrier Theodore Roosevelt have tested positive for the novel coronavirus, while hundreds of test results remain to be reported, the Navy said Friday morning.

Of the 92 percent of the crew that has been tested, 447 have tested positive for COVID-19. The Navy is awaiting results for 775 sailors and 339 have yet to be tested, according to a Navy official with knowledge of the tests.

The San Diego-based carrier has a total crew of roughly 4,845 service members, including its embarked air wing and command staff.

The Roosevelt pulled into Guam March 26 after several sailors on board tested positive for COVID-19.

A letter written by the ship's commanding officer, Capt. Brett Crozier, asking the Navy for more assistance for its sailors was leaked and broadly publicized, resulting in Crozier's firing on March 2.

Days later, then-acting Navy secretary Thomas Modly flew to the western Pacific island and, in a profanity-laced speech over the Roosevelt's public address system, said Crozier was naive and stupid if he believed his letter wouldn't be leaked.

Modly resigned Tuesday, a day after audio of that speech also leaked and was broadly publicized.

On Thursday, one sailor from the carrier who tested positive for COVID-19 on March 30, was found unresponsive in his isolation room and transported to the intensive care unit at Naval Hospital Guam. The Navy did not provide an update for the sailor's status Friday.

At least 3,155 sailors have moved to facilities on the island after testing negative.