A-10 Thunderbolt II ground-attack planes will keep flying through at least 2021, the Air Force's top general said this week.... 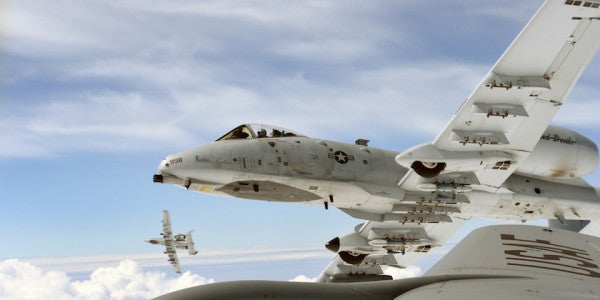 A-10 Thunderbolt II ground-attack planes will keep flying through at least 2021, the Air Force's top general said this week.

The statements were welcomed by U.S. Rep. Martha McSally, R-Arizona, a former A-10 pilot who has worked to keep the planes from being mothballed by the Air Force. The A-10, which is known for its toughness and ability to provide close-air support for ground forces, is the main mission at Davis-Monthan Air Force Base in Tucson.

Her comments follow a statement made by Air Force Chief of Staff Gen. David Goldfein at a media breakfast Tuesday in Washington, D.C., that the Air Force will keep all A-10 aircrafts flying until at least 2021. His statements were reported online by several defense news websites.

Previous commitments by the Air Force would have seen the gradual phasing out of the aircraft starting in 2018, with plans to ground the entire fleet by 2022.

“I welcome General Goldfein’s comments about retaining all our A-10s until at least 2021. Air Force leadership clearly recognize that the previous decision to mothball the A-10 was a mistake and that this aircraft can continue to play a critical role in strengthening our national security,” McSally said in her statement.

Related: The A-10 Warthog Just Got A Little More Badass »

Both McSally and Sen. John McCain fought to stave off budget cuts that threaten to ground the A-10s permanently.

A former Air Force pilot, McSally has repeatedly asked the military for a comparative “fly-off” between the A-10 and its likely replacement, the F-35, to see which plane is better at providing close-air support of ground forces.

She believes the new timeline will give officials ample time for such a test.

“My provision in last year’s (National Defense Authorization Act) requiring an A-10/F-35 fly-off before any A-10 can be retired aligns with this timeline,” she said. “We need to start a serious discussion about what will preserve the A-10’s crucial capabilities in future Close Air Support scenarios.”