Without the media fanfare generated by the gender integration of U.S. Army Ranger School last year, 10 female soldiers made... 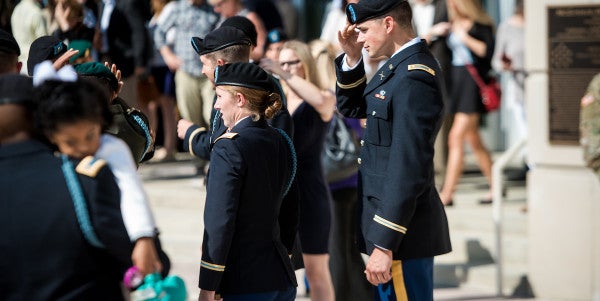 Without the media fanfare generated by the gender integration of U.S. Army Ranger School last year, 10 female soldiers made history Wednesday afternoon at Fort Benning when they graduated from the Infantry Officer Basic Leadership Course.

Griest, along with Capt. Shaye Haver and Maj. Lisa Jaster, was one of three women to graduate from Ranger School last year when the Army opened its most demanding combat leadership course to females. Griest transferred branches from military police to infantry in April and is currently assigned to the 3rd Brigade Combat Team of the 82nd Airborne Division at Fort Bragg, N.C.

Brig. Gen. Pete Jones, commandant of the Infantry School, said in a media roundtable on post Wednesday morning that the lessons learned from the gender integration of Ranger School carried forward as the Basic Officer Leadership Course was opened to women.

“It is all about standards; it is all about uniformity,” Jones said. “It’s Ranger, Ranger, Ranger. I think if you were to ask Capt. Griest, Capt. Haver and Maj. Jaster, they are not female Rangers – they are Rangers. I think it is the same thing with the lieutenants. It is lieutenant, lieutenant, lieutenant. They are going to be standing in front of their formation and they are going to be judged based on their leadership skills, not on whether they are male or female.”

Late last year, Secretary of Defense Ashton Carter officially opened all military jobs, including combat positions, to qualified men and women. Much of the training for those jobs in the Army is done at Fort Benning.

The 17-week Basic Officer Leadership Course started with 12 women, two of whom did not graduate. Students are commissioned from the U.S. Military Academy at West Point, ROTC at other universities and Officer Candidate School at Fort Benning.

Most of the soldiers, both male and female, will move into Ranger School in the next phase and will also attend Airborne School, Stryker Leader’s Course and Mechanized Leader Course.

“This is but the very first step in that process,” said Lt. Col. Matthew W. Weber, who commands the 2-11 Infantry Regiment, better known as IBOLC. “It is a critical one because we are very much focused on training and preparing the soldier, the lieutenants, to ultimately lead a rifle platoon.”

And the physical and mental standards of infantry leadership have been maintained, said Command Sgt. Maj. Joe Davis of the 2-11 Infantry Regiment.

“There has been no change in the standards and the way the course has been run,” Davis said. “We are in the business of producing leaders and it doesn’t matter if they are male or female.”

Davis takes exception to the notion that the gender-integration process is new for the Army.

“We have been integrating females within the military for years,” said Davis, who has been in the Army 24 years with 17 deployments. “I look back at past experiences overseas and we have been fighting alongside females in the infantry for many, many years. I have seen them firsthand on the battlefield doing exceptional work.”

“The reason it makes us a better Army is because this whole issue has driven us to ensure we have the right standards aligned to each occupational specialty in the Army,” Wesley said. “… By defining that, what we have done is we have a gender-neutral, standards-based training environment.”

It no longer becomes a question of male or female, Wesley said.

“Once you get to that minimum threshold, we say, ‘Oh, by the way, we have doubled the population from which we can recruit talent,’” Wesley said. “That makes us better.”

The first gender-integrated Armor Officer Basic Leadership Course, which is about two weeks longer than the infantry course, is ongoing, and 10 women have started that process.

“What you are seeing here is an indicator that this is business as usual,” Wesley said. “We do missions in the Army and we get tasks all the time. And we are very good at doing that which we are asked to do. … The Ranger aspect was new and there was a lot of scrutiny.”

The moment was historic, and Jones acknowledged that, but he also pointed to the future these lieutenants represent as they began their Army careers.

The Army made six IBOLC graduates – three men and three women – available for a media roundtable. The lieutenants could be quoted, but not named, according to the rules outlined by the Army prior to the interviews.

Maneuver Center of Excellence Spokesman Ben Garrett said the post wanted to keep the focus on all the students.

“It is important to focus on the point that these lieutenants met the same gender-neutral-based standard to become future rifle platoon leaders,” Garrett said. “All the graduates meet the high physical demands of the course, and met the same standard as previous Infantry Basic Officer Leadership Courses. … As they walk across the stage today, they will not receive the recognition as a man or woman, but as a second lieutenant in the U.S. Army.”