A petition requesting restoration of the U.S. Navy’s traditional rating titles that was posted to the White House website has... 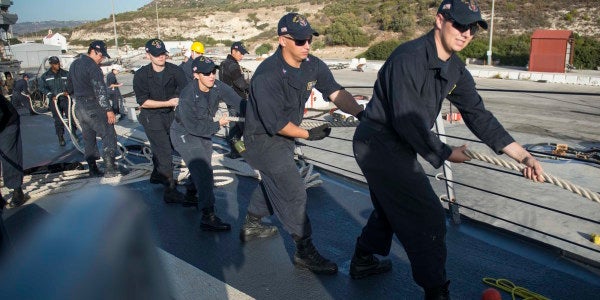 A petition requesting restoration of the U.S. Navy’s traditional rating titles that was posted to the White House website has exceeded the 100,000 signatures required to prompt a response from the White House.

The petition was created just hours after the Navy’s top brass announced on Sept. 29 that the service would be modernizing its 200-year-old enlisted rating system. A part of that plan was immediately scrapping rating titles.

Instead of calling enlisted sailors by their occupation, such as Boatswain Mate and Gunners Mate, sailors would simply be referred to by their rank.

The Navy has said the changes to the enlisted rating system will allow for more career flexibility and align sailors’ jobs with the civilian workforce.

The decision was met with widespread criticism from active duty and veteran sailors across social media, and the petition posted to the whitehouse.gov website garnered thousands of signatures within hours.

“Being known by your job title was a sense of pride,” A sign of accomplishment,” read the petition. “The Secretary of the Navy and Chief of Naval Operations just senselessly erased this tradition.”

By Friday, the petition had garnered more than 100,000 signatures within 30 days, meeting the requirement to expect “an official update from the White House within 60 days.”

Since the Navy’s initial announcement, it has released additional information about the modernization plan, including a phased approach to implementing further changes.

But the additional information has still been met with criticism on social media.