A crowd of U-2 Dragon Lady pilots gathered in Hangar M at Beale Air Force Base on Wednesday to welcome... 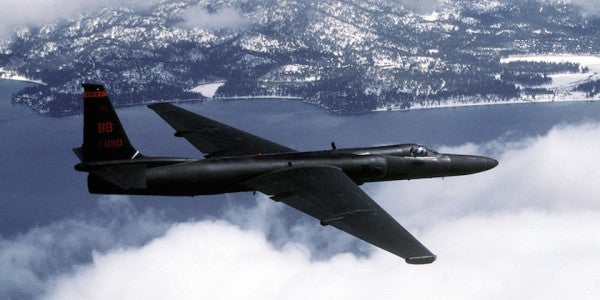 A crowd of U-2 Dragon Lady pilots gathered in Hangar M at Beale Air Force Base on Wednesday to welcome the newest member into their elite club and to celebrate a milestone.

The pilot had made his first solo flight in the historic plane. He was the 1,000th pilot to do so.

Maj. J.J. (whose last name was withheld by the Air Force for security reasons), became the 1,000th person to solo in the U-2, but only after Nos. 998 and 999 completed their first solo flights Friday and Tuesday.

The new pilot taxied his ride up to the crowd and, as tradition dictates, with one foot on the ladder and the other on the tarmac, launched a champagne cork onto the roof of the hangar. “It's definitely an honor to be No. 1,000, but I'd be just as honored to be 994 or 1,004. It just feels good to earn the patch,” Maj. J.J. said. He touched his shoulder where 1st Reconnaissance Squadron Commander Lt. Col. Paul Wurster placed the squadron patch moments earlier, signifying Maj. J.J. has qualified to fly the aircraft on his own.

Maj. J.J. took off around noon to practice touch-and-go landings for more than an hour as part of his training to become a mission certified U-2 pilot. It was his seventh flight in the U-2 but the previous six were in a two-seat trainer with an instructor.

Training is far from over for Maj. J.J., Wurster said. It takes about nine months to train a U-2 pilot, and the 1st Reconnaissance Wing runs eight classes of three new pilots a year.

First they train in the T-38 Talon and catch up on any necessary qualifications they don't have — such as survival and resistance — before they begin flying the U-2. The new pilots must complete two classes, basic and mission, in the U-2 that take about three months apiece.

“From this point on, he only has three flights with another person, then he will never have to fly with somebody else again,” Wurster said. “It'll take about two to three months to finish up, and he could be flying real missions by Christmas.”

It took 61 years to reach 1,000 U-2 pilots. As a contrast, the number of people to pilot the F-16 likely is in the tens of thousands, said Col. Larry Broadwell, commander of the 9th Reconnaissance Wing at Beale Air Force Base.

“We will celebrate this tremendous accomplishment today, then tomorrow get back to work on another 1,000,” Broadwell said.

It could take a while. The Air Force's fleet of U-2s includes just 33 planes, a much smaller number compared to the inventory of 1,017 F-16 Fighting Falcons, according to official Air Force fact sheets.

Tony Bevacqua became the 55th pilot to fly the U-2 when he made his first solo flight from Groom Lake, more famously known as Area 51, on March 14, 1957.

The longtime Yuba City resident said the future is bright for the U-2 due to revisions and upgrades that made the Dragon Lady safer for pilots and more effective at its mission.

“The main thing is, who would have thought the airplane would have lasted this long,” Bevacqua said. “By golly, it's great that it did and it's still got many more years left in it if they'll let it.”

U-2 pilots tend to stay with the unit longer than most because of strict health restrictions and the cost of training and equipment. That contributes to the relatively small number of pilots to fly the plane during its 61 years in the air, Bevacqua said.

“I think it's great for both the Air Force and Lockheed. We're all fortunate to have it,” Bevacqua said. “I think it's a good celebratory time. I hope (the pilot) isn't too hung over the next day.”