Sailors aboard the amphibious assault ship Iwo Jima reported smoke in the cargo hold at 11:45 p.m on Thursday. The ship was pierside at Naval Station Mayport, Florida, where it's undergoing maintenance 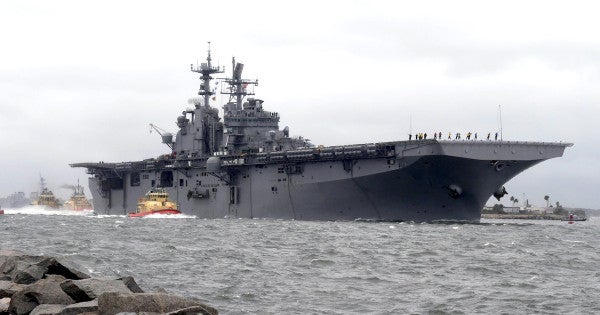 Sailors aboard the amphibious assault ship Iwo Jima reported smoke in the cargo hold at 11:45 p.m. The ship was pierside at Naval Station Mayport, Florida, where it's undergoing maintenance.

Members of the crew — along with sailors from the guided-missile destroyer The Sullivans, Naval Station Mayport Florida firefighters, and members of the Jacksonville Fire Department — put the fire out about five hours later.

Eleven sailors were treated at the scene and were released, according to a statement from Expeditionary Strike Group 2. Injuries included heat exhaustion and smoke inhalation.

The fire didn't spread to surrounding areas, according to the statement, and did not damage the pier.

The cause of the fire remains under investigation.

“Sailors are rigorously trained to combat casualties such as this fire, and we are grateful for the assistance of the installation and the local community to help ensure the safety of our people our ships,” Capt. Darrell Canady, the Iwo Jima's commanding officer, said in a statement.

There were no weapons or munitions aboard the Iwo Jima at the time of the fire.

The Iwo Jima is at least the third Navy ship damaged by fire in the last year while undergoing maintenance, USNI News reported.

In May, the commanding officer of the destroyer Fitzgerald reported more than 15 fire-safety incidents on the ship since it arrived at the Huntington Ingalls Shipbuilding yard in Mississippi for repairs following a fatal collision. One of those incidents “caused damage to bulkhead lagging and electrical panel,” according to USNI news.

In November 2018, there was an electrical fire on the destroyer Oscar Austin that took 30 people to put out, the outlet reported.

The Navy is still assessing the damage caused by Thursday night's fire.