But they'll be jumping with an item not on the packing list of World War II U.S. soldiers — or at least not the official one 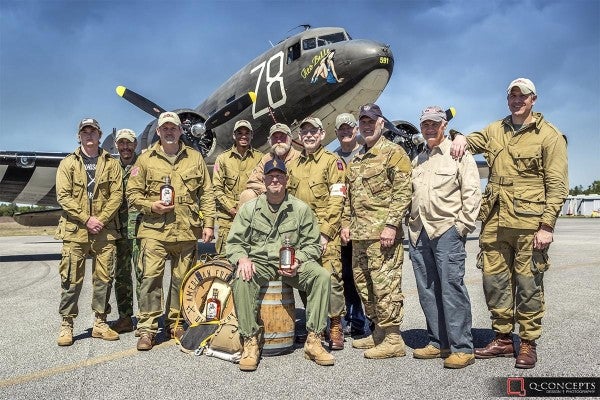 Editor's Note: This article by Sean Mclain Brown originally appeared onMilitary.com, a leading source of news for the military and veteran community.

With the 75th anniversary of the D-Day invasion into Normandy, France coming June 5, a group of veterans are planning a reenactment jump as part of the celebration.

But they'll be jumping with an item not on the packing list of World War II U.S. soldiers — or at least not the official one: bourbon.

The group of 15, backed by the American Freedom Distillery based in St. Petersburg, Florida, plans to jump out of the C-47 “Tico Belle,” the same plane that dropped soldiers on D-Day. Now owned by the Valiant Air Command museum in Florida, the plane will be flown to France for the anniversary.

The distillery is owned and operated by a group of special forces veterans whose story was featured in the 2018 film “12 Strong,” an account of the first operators deployed to Afghanistan after the Sept. 11, 2001 attacks.

The team will parachute into the historic drop zones of Normandy on June 5th, along with the airdropped barrel of bourbon.

“Our brand is founded by a team of former special forces members, so it's an incredible honor to be invited to this celebration as a brand, but also as veterans and represent our country and brethren of past, present,” Scott Neil, co-founder of American Freedom Distillery and Green Beret veteran said in an email.

“This is a unique, once in a lifetime opportunity for us and it's incredible to not only be invited to participate in the 75th anniversary but to be the lead aircraft for the D-Day reenactment of airborne celebrations.”

Retired Army Maj. Mark Nutsch said that the Tico Belle made drops into German-occupied territory five nights in a row, and that it was exciting to be jumping from the same historic aircraft.

“We really wanted to honor the resistance fighters, who many people don't know about,” said Nutsch, who works with the distillery as a brand representative. “We want the younger generation of warriors to understand what these men put on the line.”

The reenactment will be meticulous, down to authentic WWII Allied uniforms, military round parachutes, weapons, and equipment.

“We're excited to the jump and really show our respect for the untold stories and sacrifices,” said Nutsch. “We're looking forward to the camaraderie with other veterans along with our families.”

When he found out they were going to be able to honor the heroes of D-Day with a jump, retired Chief Warrant Officer Bob Pennington “felt like a kid again.”

“It may be the last time we have any WWII veterans,” Pennington, who also works with the distillery, said. “It's an opportunity to honor the little known WWII resistance special operator teams, if not for them D-Day wouldn't have been a success.”

SEE ALSO: 5 Incredible Military Movies And Shows You May Have Missed In 2018

WATCH NEXT: On The Red Carpet For '12 Strong'