12 Years After Losing Her Legs In Helicopter Crash, Tammy Duckworth Is A Senator

Nearly 12 years to the day after a rocket-propelled grenade downed the Army helicopter she was co-piloting over Iraq, Tammy... 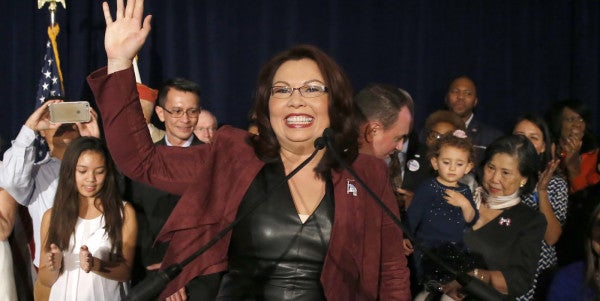 Nearly 12 years to the day after a rocket-propelled grenade downed the Army helicopter she was co-piloting over Iraq, Tammy Duckworth prepared Wednesday to become Illinois' next junior U.S. senator, recapturing for Democrats the seat once held by President Barack Obama.

Duckworth's win follows an often low-key yet high-profile campaign against Republican Sen. Mark Kirk, who billed himself as the underdog in Democrat-leaning Illinois and made his recovery from a 2012 stroke a focus of his re-election bid.

“I'm here tonight because of the miracles that occurred 12 years ago this Saturday, above — and in — a dusty field in Iraq,” she told an ebullient crowd Tuesday night at a downtown Chicago hotel ballroom. “Just as I try every day to live up to the sacrifice my buddies made to carry me off that battlefield, I will go to work in the Senate looking to honor the sacrifice and quiet dignity of all those Illinoisans who are facing challenges of their own.

“After all, this nation didn't give up on me when I was at my most vulnerable, needing the most help. I believe in an America that doesn't give up on anyone who hasn't given up on themselves.”

It's a promotion years in the making for Duckworth, who is in her second term representing the northwest and west suburban 8th Congressional District. She's been mentioned as a Kirk challenger virtually since she first defeated firebrand conservative Republican Rep. Joe Walsh four years ago.

Duckworth, who easily dispatched two Democratic opponents in the March primary, received significant support from national Democrats in a race they highlighted as a top target in an effort to retake the Senate that appeared to fall short.

Given her opponent's struggles, Duckworth often ran a play-it-safe campaign marked significantly by photo-ops and stage-managed events. That was possible largely because Kirk failed to attract campaign money from outside groups that had other priorities in a presidential year when Illinois trends Democratic and also made a series of verbal gaffes.

Duckworth's ascension to the Senate follows humble beginnings and a storied military history.

Duckworth was born in Bangkok and grew up in Asia as her dad, a retired Marine, worked on refugee, development and housing programs. Later, her father lost his job, and Duckworth often mentioned on the campaign trail that her family relied on food stamps and reduced-price school breakfast and lunch programs while she attended high school in Hawaii in 1984 and 1985.

Still, Duckworth was able to earn a degree in political science at the University of Hawaii and a master's degree in international affairs at George Washington University.

She then moved to Illinois and attended Northern Illinois University and joined the Illinois National Guard. She was deployed to Iraq as a Black Hawk helicopter pilot, a placement that altered the course of her life.

On Nov. 12, 2004, the helicopter she was co-piloting was hit by an RPG. Duckworth lost her legs and some use of her right arm.

While she rehabbed at Walter Reed Army Medical Center, U.S. Sen. Dick Durbin invited her to attend the State of the Union address in 2005. Before long, she was being courted by Durbin and other high-profile Democrats to enter politics, and in 2006 she ran for Congress against Republican Peter Roskam but lost the close contest.

Within weeks, Duckworth was asked by then-Illinois Gov. Rod Blagojevich to oversee the state's Department of Veterans' Affairs. During her time there, she initiated a mental health hotline for suicidal veterans, pushed for an Illinois Lottery game that provided millions of dollars for veterans programs and established a program to screen vets returning from overseas for traumatic brain injuries. Still, other high-profile efforts fell flat, including a veterans health care program that was supposed to help thousands of veterans but averaged fewer than 100 during her tenure.

After Obama was elected president, he asked her to serve as an assistant Veterans Affairs secretary, where her job was focused mostly on public relations. From there, she again sought a spot in Congress in a district drawn to favor a Democrat, taking out Walsh, who went on to become a controversial radio talk-show host.

A new member of a minority party, which traditionally makes it difficult to pass legislation, Duckworth's two terms in Congress have been marked by few legislative successes. Still, she said she routinely crossed the political aisle to help push legislation she thought was important, regardless of political party. For instance, she said she co-authored the Clay Hunt Act, which was aimed at reducing suicides among members of the military and veterans and also sought to improve access to mental health care for military members and veterans.

Duckworth also has said she's helped improve legislation, including a change in policy that led the military to streamline the purchase of camouflage uniforms, and another effort to end a deal in which the Army was buying spare parts for a piece of military equipment not often used because it isn't suitable in Afghanistan. The work, she said, is expected to save billions of dollars.

The campaign between Duckworth and Kirk was unique. Both candidates often used wheelchairs to get around on the campaign trail, and the two kept a relatively low profile campaigning even though the battle between them routinely was touted as one to watch nationally.

In challenging Kirk, who defeated Democrat Alexi Giannoulias to take the Senate seat for Republicans in 2010, Duckworth characterized her bid as part of a larger Democratic effort to change the Senate majority because “it's time for Washington to be held accountable.”

Because Kirk also has a military background, the two often debated veterans' issues during the campaign, with Kirk attacking Duckworth's record and airing ads that accused her of firing and threatening whistleblowers to cover up abuses at a veterans home — the subject of an ongoing lawsuit. But Kirk also made one of his blunders while attacking Duckworth. During a debate, she noted her family's history of military service dating to the Revolutionary War. Kirk responded that he'd “forgotten that your parents came all the way from Thailand to serve George Washington.”

The remark drew widespread criticism, including from both presidential campaigns, and Kirk later apologized on Twitter and at a follow-up debate.

At that forum, Duckworth showed an ability to go on offense herself. The Democrat accepted the apology and said she wanted to move on and discuss “the issues.” On election night, she said Kirk “has served this nation for over two decades, and we are grateful for his service.”

As a senator, Duckworth said, she will focus on trying to make college more affordable, making Illinois a leader in renewable energy and ensuring veterans get the best care possible, among other issues.

“Thank you, Illinois, for this unbelievable honor and for putting your faith in me,” she said. “It will not be misplaced.”