The 16 People Who Make Up Every Operational Planning Team

Supporting the decision cycle of a joint force commander is important to leaders at the operational and strategic levels of... 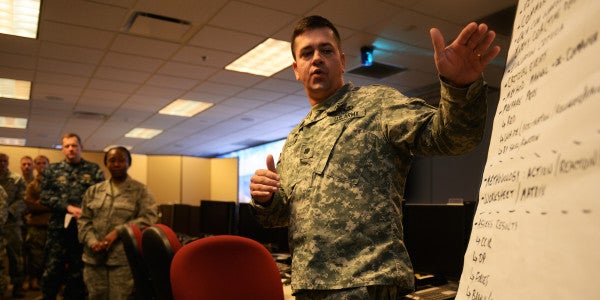 Supporting the decision cycle of a joint force commander is important to leaders at the operational and strategic levels of warfare. Commanders pull together operational planning teams from across their staff to solve specific problems. Often, planning teams contain members of the staff across each J-code directorate and members of various divisions and branches within each directorate. Leaders in the staff must understand the various types of personalities they will encounter to effectively run a team.

The philosopher talks a big game and can cite Clausewitz, Sun Tzu, Jomini, and other historical strategists at will. However, philosophers do not see themselves as action officers. Never ask a philosopher to create a PowerPoint slide, information paper, or any other actual product. However, you may find they will be glad to tell you what is wrong with your products ad nauseam.

It can be difficult when someone decides to pull a filibuster in your group. There comes a point when healthy debate is no longer productive or becomes outright unprofessional. The debater is happy to spend an hour discussing a single line or word in your mission analysis. Often, debaters form an emotional attachment to their irrelevant point of view that they formed five minutes ago. The team will concede their point repeatedly just to stop the debater from talking. After hours of vigorous debate, when it comes time to brief the commander, the point of contention and rigorous discussion is passed over in half a second with a head nod. The debater likes to think of himself as a red teamer or devil’s advocate rather than the obstacle to planning that he is.

No one is better at spotting a missing Oxford comma within an order. The grammar Nazi is useful to the operational planning team for proofreading products, but will often side with the debater in making the point that passive voice is unacceptable. Don’t expect much creativity, but retain him on the team for his proofreading and writing skills.

Similar to the grammar Nazi, no order or concept of operations will escape the jackboot of doctrine. Heaven forbid there is a word or phrase that does not match what is in a joint publication or service field manual. The doctrine Nazi is difficult to argue with because he or she is using a classic appeal to authority to make a point. Doctrine is not dogma; it is rare that doctrine will provide the exact answer you need.

Does the font on slide 7 not match the font on slide 22? No worries, the chaff will point out this glaring error that will more than likely invalidate the entire concept of the operation. The chaff provides no actual content or intellectual rigor in planning, but is essential to formatting and uniformity in the brief. The chaff can be dangerous, especially when he is a senior leader.

These people have one line they must get into the brief at all costs. It may be a single fact or assumption in the mission analysis or a nuance in the command relationships chart. Normally, a two-star told the Costanza to get that piece of information into the brief at all costs. You get this from the Costanza once a day, but as soon as it happens, the Costanza is walking out of the planning room on his high note not to be seen until the next planning session.

One of your foremost experts on anything the operational planning team is tasked to do. The professor is happy to take the team through the crawl, walk, and run phases of mission analysis. Unfortunately, you only have two hours to get the final product in front of the commander. Professors often fail to understand the consequences of this timeline. The professor believes they learned from the best and will usually identify themselves as a graduate of the program that makes them the authority.

People are shaped by their experience. The guy from band camp begins every point or discussion with “When I was in Iraq” or “This is how we did it when I was in Afghanistan,” followed by a eight-minute soliloquy on why his way is the only way. Again.

This individual will ensure the team works until the last second. Words matter, but to the wordsmith, every word on every slide has a synonym that conveys a better meaning, is more direct, or better conforms to doctrine. Much of this wordsmithing occurs after approval of the brief by a general officer. Word by word the plan does not change, but by 3 am, the plan is completely unrecognizable to the original product and you are left explaining to a flag officer why you completely changed it.

The wallflower attends every planning meeting and sits quietly through each planning session without saying one word. He may be good for getting coffee or a food court run, but don’t expect any production. In fact, the wallflower is mad when you ask him to make coffee for the group as he was changing his Facebook profile picture when you asked. Although he provided no content to any product, his “participation” and “valuable input” in the operational planning team is annotated on his officer evaluation report and end of tour award.

First cousin to the wallflower. The escape artist shows up to each planning session to ensure his name is on the sign-in roster, and that is the last time you will see him for the day, unless you bump into him at the gym, PX, or food court. He may show up for key briefing, but only if his boss is expected to attend as well.

Second cousin to the wallflower. The ghost will show up the first day of the operational planning team, never to be seen again. The ghost may be a competent and hard worker, but your team does not rank high on his list of priorities. You email the ghost only to receive an out of office reply. The ghost may be on leave, receiving household goods, or working on his master’s degree. The ghost is in many places, just not where you need him.

This planner floats above the team. Rarely seen until the rehearsal brief when he or she will then shit all over the product. The seagull will offer no solutions to all the problems with the plan, and frankly does not understand why nobody likes them.

Present in every meeting, the PowerPoint ranger is drawn to the keyboard like a moth to a flame. The PowerPoint ranger has the intellectual capacity to match anyone on the team; however, due to youth and competence with modern technology, the team lead will put them in front of the computer to nug on slides. The PowerPoint ranger has leverage and knows it. Ultimately, the person creating the slides is the gatekeeper for anything the commander will see. Like the freshman in college with a car, making friends with this guy is essential for success.

This is actually a collective group of individuals. From an operational planning team of 20, there may be only six or seven core members. They arrive early, work late, and put together the briefings and orders over the course of multiple 16-hour days. You may catch them together in the dining facility taking a 15-minute break to eat their one meal of the day. At the end of the day, all the core members want to do is see their family for a few minutes after their workday and before they fall asleep while others get drunk and take the credit for their work.