The movie won't get a nationwide release until Jan. 10, 2020, but Universal Pictures is inviting readers to free advance screenings at 15 military bases, as well as local theaters in more than 40 markets, before the official release 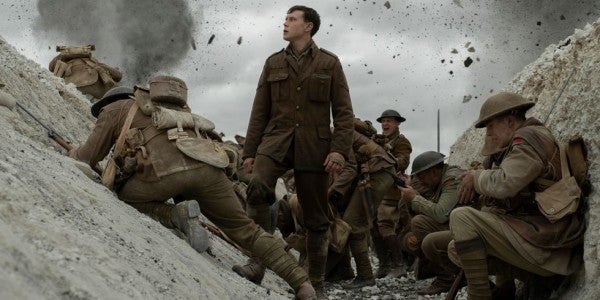 The new movie “1917” recreates the experience of troops on the ground during World War I through the story of two young soldiers sent on a dangerous mission to the front lines.

The movie won't get a nationwide release until Jan. 10, 2020, but Universal Pictures is inviting readers to free advance screenings at 15 military bases, as well as local theaters in more than 40 markets, before the official release.

The Army & Air Force Exchange Service has set up free screenings for service members, military families and military retirees at 15 on-base Reel Time theaters on Dec. 14. See a complete list of base theaters at the bottom of this post, and check with each location for details on tickets.

The local theater screenings are set for Dec. 11, Dec. 18, Jan. 7 and Jan. 8. If you follow the link below, you can find out whether there's a screening in your city and then choose a date and theater location.

There are only 25 pairs of tickets (50 total) available for each screening via this link, so you should probably act fast to get your name on the list.

“1917” was directed by Sam Mendes, who won an Oscar for “American Beauty” and also made “Skyfall” and “Spectre.” He left the Bond series to make “1917,” and it's an ambitious movie that's certain to be nominated for lots of awards this winter.

The film follows two young British soldiers (played by George MacKay and Dean-Charles Chapman) assigned to cross enemy territory and deliver a message with orders to stop a British attack, one that's doomed to fail because the German Army has set a trap.

Working with the great cinematographer Roger Deakins (nominated for FOURTEEN Oscars and mysteriously a winner only once), Mendes sets up the movie as one continuous shot that takes place in something like real time.

The movie's military story is so compelling that you won't really think much about the amazing filmmaking technique going on, but I'm looking forward to multiple viewings to figure out just how Deakins and Mendes hid the cuts and created their fantastic illusion.

World War I movies don't get a lot of love, maybe because so few of us still here have a direct connection to anyone who experienced the war. Like Peter Jackson's brilliant documentary “They Shall Not Grow Old,” “1917” humanizes the battles for modern audiences and devastatingly illustrates that era's transition into modern warfare.

Here's a complete list of the Reel Time theaters hosting a free screening on Dec. 14: