An Army Magazine article from 1956 was circulating on Twitter recently, and it predicted what the soldier of the future... 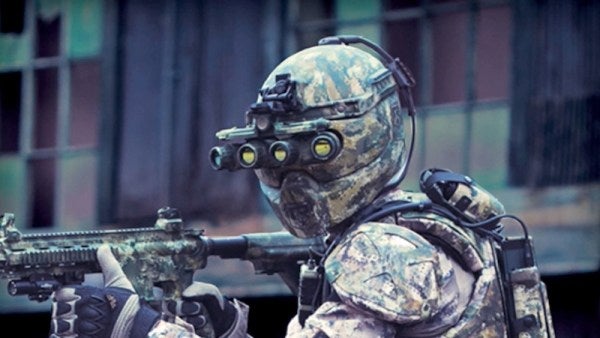 Here are 10 pieces of gear the “soldier of the future” has — right now.

“The FutureArmy soldier … will gain independence and action from an ultra-small radio transmitter and receiver,” Rigg wrote. “This transceiver will … place the individual soldier in communication with all other members of his fighting team.”

“The soldier will be able to … change darkness into day with one flick of a wrist on the infrared dial and switch.”

“The individual weapon of the Futurarmy soldier will be an automatic carbine which will replace at least four of today's weapons: the M1 rifle, the carbine, the AR, and the submachine gun.”

The Army is even designing computerized sights — the Ballistically Optimized Sniper Scope (BOSS) — for snipers. The computer built-in to the scope speeds up the sighting-in process.

“Projected into battle-zone by three-dimensional transport devices, this futuristic soldier will be able to arrive and surprise his enemy with a force and suddenness never before known.”

The doctrine of “air assault” with helicopters continues to this day, and soldiers are often transferred to and from the battlefield in a variety of different helicopter types. The use of helicopters has also greatly reduced the number of combat deaths since wounded soldiers are able to get medical attention much quicker.

“The future soldier's helmet will be visored … and will have unique functions in addition to its face protection.”

Although not in service yet, the new “Iron Man” suit being developed by SOCOM, which are to be tested in 2018, are slated to have visors. Called the Tactical Assault Light Operator Suit, it is supposed to monitor an operator's vital signs, give them increased perception of the surroundings, and offer other high-tech functions.

“Pockets on the outside of each boot will carry a compact self-medical-aid kit for emergency use.”

In 2013, the Army began issuing the “Individual First Aid Kit II,” containing two tourniquets, a tactical combat casualty card to annotate what kind of first aid was applied to a wounded Soldier, a marker, an eye shield, a rubber seal with a valve for sucking chest wounds, and a strap cutter.The kit goes inside a custom pouch that can be mounted on the back of a Soldier's Improved Outer Tactical Vest.

Rigg's vision was a soldier that was self-sufficient, even having a special pouch on his or her uniform for toiletries. Though most soldiers don't carry around toilet paper in their pocket, it does come standard in the meals, ready to eat that troops have with them in the field.

“To help you … flying artillery and guided missiles will bracket the region and seal it off by striking any aggressor reinforcements moving to the scene.”

“Futurarmy soldiers will wait by their machines of war as these fantastic robot spies, called Owls, report on the location of enemy concentrations and installations.”