Editor’s Note: This article by Richard Sisk originally appeared on Military.com, a leading source of news for the military and... 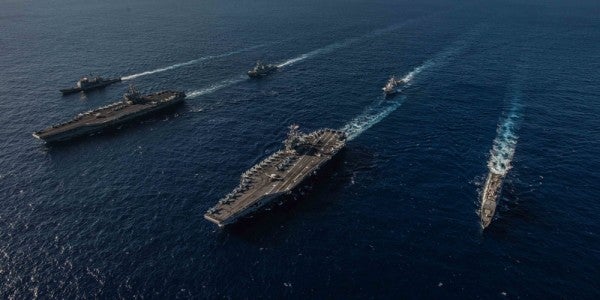 The aircraft carriers Ronald Reagan and John C. Stennis and their battle groups are now operating together in the Philippine Sea demonstrate the commitment of the United States to freedom of the seas and its resolve against China's efforts to dominate the region, according to the Navy.

China's buildup in the South China Sea has progressed from creating military bases on artificial islands to fortifying them with surface-to-air missiles (SAMs) and other sophisticated defenses, Adm. Phil Davidson, commander of U.S. Indo-Pacific Command, said in public remarks Saturday at the annual Halifax International Security Forum in Nova Scotia.

In announcing the deployment last week of the Reagan and Stennis and their battle groups — a total of 10 ships, about 150 aircraft and 12,600 sailors and Marines — the Navy made clear the focus of their air, surface and anti-submarine warfare drills is on China.

“The increased presence of two carrier strike groups in the region highlights the U.S. commitment to a free and open Indo-Pacific,” Vice Adm. Phil Sawyer, commander of the 7th Fleet, said in a statement on the deployment.

The Navy’s display of strength comes despite China's attempts to restrict ship movements in the South China Sea.

The presence of the carriers “demonstrates that the U.S. Navy will fly, sail and operate anywhere international law allows,” Sawyer said.

The carrier operations were announced as Vice President Mike Pence toured the region with stops in Singapore, Japan, Australia and Papua New Guinea.

At the Association of Southeast Asian Nations, or ASEAN, summit last Thursday in Singapore, the vice president, without naming China, warned of threats of “empire and aggression” in Southeast Asia.

Pence and Chinese President Xi Jinping were together over the weekend at the Asia-Pacific Economic Cooperation, or APEC, summit in Papua New Guinea, but appeared to make no headway in the standoff between the U.S. and Beijing on tariffs and trade, or in easing tensions in the region over the great-power rivalry.

According to pool reports from reporters on the trip, Pence said he spoke with Xi twice “briefly and candidly” over the weekend.

The U.S. wants a better relationship, “but there has to be change” on China's part, the vice president said.

The APEC summit closed Sunday without reaching agreement on a final communique. Papua New Guinea Prime Minister Peter O'Neill said, in a statement issued later, that “the entire world is worried” that the U.S.-China rivalry could spiral out of control.

The presence of two carriers working in tandem is not unusual, officials with the U.S. 7th Fleet said in a statement. The Navy on rare occasions has deployed three carriers together.

In November 2017, at the height of tensions with North Korea, the carriers Nimitz, Reagan and Theodore Roosevelt conducted a tri-carrier strike force exercise off the peninsula.