Two soldiers died and 23 servicemembers were injured in three days during training exercises at Fort Hood, Fort Bragg and... 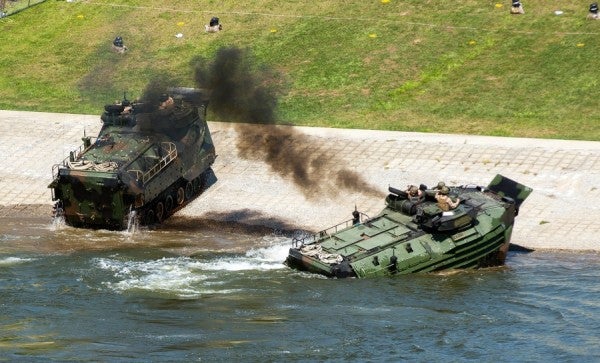 At Fort Hood, Army Staff Sgt. Sean Devoy was killed after falling during helicopter training, according to an Army statement.

The incidents come just one day after 14 Marines and a sailor were injured in a sudden fire during training at Camp Pendleton, Calif.

An explosion at Fort Bragg has left 15 soldiers injured.Photo via Wikimedia Commons

The cause of the incidents was not clear Thursday, but authorities had launched investigations into all of them, Marine and Army officials said.

Devoy had served three combat deployments to Afghanistan since joining the Army in 2010 and his awards included the Air Medal, the Army Commendation Medal, the Army Achievement Medal, the Aviation Badge and the Combat Medical Badge, according to Army records.

The Army said his death was under investigation by officials with Fort Rucker, Alabama-based U.S. Army Combat Readiness Center.

The soldiers injured Thursday at Fort Bragg were assigned to a unit within the Army Special Operations Command, said Army Lt. Col. Robert Bockholt, a spokesman for the elite command based at the North Carolina post. He did not identify the specific unit involved in the training, although the Associated Press reported that Dalida was assigned to assigned to 1st Special Warfare Training Group (Airborne). The injured were transported to Womack Army Medical Center on Fort Bragg with varying injuries, Bockholt said.

In California, six of the 15 injured servicemembers, all assigned to 1st Marine Division, were in critical condition after their amphibious assault vehicle ignited during training at Camp Pendleton.

All 15 remained in southern California hospitals a day after the incident, which occurred about 9:30 a.m. local time, said Marine 1st Lt. Paul Gainey, a spokesman for 1st Marine Division. In addition to those in critical condition, six more were in serious condition and three others suffered minor injuries.

The injured troops belong to 1st Battalion, 1st Marine Regiment and 3rd Assault Amphibian Battalion, Gainey said. Their families had been notified by Thursday of the incident, but the Marines will not release their names, he said, citing medical privacy laws.

It remained unclear Thursday what caused the amphibious assault vehicle to ignite on land during a routine combat readiness evaluation operation, Gainey said. He said investigators were in the early stages of their probe.

An amphibious assault vehicle, or AAV-7, is 30-ton, armored vehicle designed to carry Marines and their equipment from Navy amphibious assault ships onto land and into combat. The tracked vehicles, known to Marines as “amtracks,” feature a boat hull-shaped front end that helps them maneuver through water. They can carry up to 28 Marines at a time.

An investigation showed that ordnance ignited, causing the vehicle fire in that incident. The Marines later stopped using the vehicle’s mine clearance system. In August, the Marines began using an updated version of that system, which the service said is safer.

The latest incidents follow a series of deadly aircraft and warship crashes that have killed 42 servicemembers since July and raised questions among Pentagon officials and lawmakers about the state of the military.

Sen. John McCain, R-Ariz., said Wednesday that much of the problems plaguing the military, including training mishaps, are “self-inflicted.” The chairman of the Senate Armed Services Committee said four times as many servicemembers have been killed in training incidents during the last three years than in combat and pushed fellow lawmakers to pass the annual defense spending bill to provide the Pentagon some budget stability.

“It is the accumulation of years of uncertain, untimely and inadequate defense funding, which has shrunk our operational forces, harmed their readiness, stunted their modernization, and as every single member of the Joint Chiefs of Staff has repeatedly testified before the Committee on Armed Services, put the lives of our servicemembers at greater risk,” McCain said.