Two female Army officers have been approved for initial Special Forces training, the first step in the long process to... 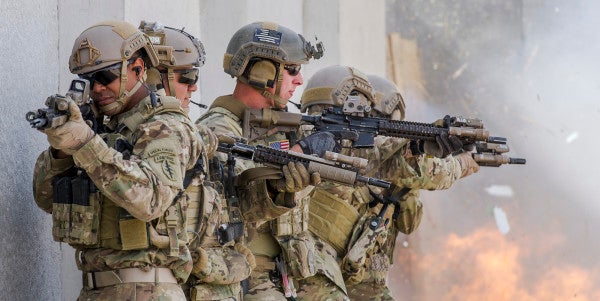 Two female Army officers have been approved for initial Special Forces training, the first step in the long process to earn the coveted Green Beret, an Army spokeswoman said Monday.

The women are the first female soldiers to be accepted into the Special Forces Assessment and Selection and could report to the three-week program at Fort Bragg, North Carolina as early as October, said Maj. Melody Faulkenberry, a spokeswoman for the Army’s John F. Kennedy Special Warfare Center.

Defense Secretary Ash Carter’s order last year to drop all restrictions on women serving in front-line combat jobs and units paved the way for women to attempt the rigorous trainingthat soldiers must complete before entering Special Forces. The earliest the women could earn the Green Beret and Special Forces tab and be assigned to an Operational Detachment-Alpha would be in 2018, though they have not yet been officially assigned to an SFAS class, Faulkenberry said.

The Army declined to name the women or provide information about their service backgrounds.

Faulkenberry said it would be unfair to publicly identify the soldiers.

“We want to allow the soldiers the same opportunities everyone else has to attend Special Forces Assessment and Selection,” she said. “If their names came out, it could possibly change the way they are treated … or add undue pressure on them in a course that is already very demanding.”

The Army had also declined to name female participants in its famously grueling Ranger School. Three women — Capt. Kristen Griest, 1st Lt. Shaye Haver and Maj. Lisa Jaster — graduated last year from the more than two-month-long class. They were not named publicly until the day before they graduated in ceremonies last August and October at Fort Benning, Georgia.

The women selected to attend SFAS likely were commissioned in 2013 and are either first lieutenants or captains, according to an Army document describing the requirements for acceptance into Special Forces Assessment and Selection.

Related: The First Woman To Graduate Ranger School Is About To Join The Infantry »

The two officers accepted into Special Forces training were among nine female active-duty Army officers who applied. A total of 340 soldiers – men and women – applied for the program and 220 were accepted. Some of the soldiers who were not selected for SFAS – including five of the women – could potentially be chosen for other special operations jobs in civil affairs or Psychological Operations.

To be accepted in SFAS, according to the Army documents, officers must have been promoted to first lieutenant between April 1, 2014 and March 31, 2015, be cleared for world-wide deployment, possess a secret clearance and score at least a 240 on the Army Physical Fitness Test.

Generally, one-third of soldiers accepted for Special Forces Assessment and Selection graduate to the “Q” course, Faulkenberry said. Roughly 50 percent of soldiers who begin the Qualification Course graduate and earn the Green Beret, she added.

Since Carter ended restrictions in December to women serving in any position in the military, at least one female Army officer — Griest, the Ranger School graduate — has joined the infantry. Twenty-one women were commissioned this spring into the infantry and armor branches through the U.S. Military Academy at West Point, New York, ROTC and Officer Candidate School. They must first complete months of job-specific training and meet a series of physical requirements before they are assigned to a unit to serve as platoon leaders.

Several more female recruits have enlisted this year with the intention to serve in the infantry or armor, but none have yet completed initial entrance training.

Some female enlisted soldiers have shown “some interest” in attempting Special Forces training, Faulkenberry said. However, none have been accepted into the program, as of Monday, she said.