2 Marine Commanders Fired, 33 Others Punished In Wake Of Nude-Photo Scandal

The Marine Corps has fired two commanders for problems within their units related to the treatment of women as the... 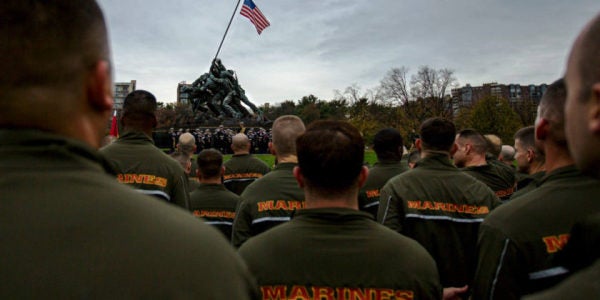 The Marine Corps has fired two commanders for problems within their units related to the treatment of women as the service continues to investigate dozens of Marines involved in a nude photo-sharing scandal, service leaders said Tuesday.

Two of five Marine Corps commanders removed from duty in 2017 were due to a loss of trust and confidence in their ability to lead their units because of the way their troops behaved toward women, Gen. Glenn Walters, the service’s No. 2 general, told reporters at the Pentagon. He declined to name the commanders who had been dismissed.

“They didn’t have the correct command climate in what they did,” said Walters, the Marines’ assistant commandant. “…If the commander wasn’t behaving right or holding his people accountable, then he was relieved of command. Simple as that.”

It was the first time that the Marine Corps had acknowledged punishing commanders for problems related to the so-called Marines United scandal, in which some male Marines were accused in March of sharing revealing and often explicit photographs of female Marines through a private Facebook group.

In addition to the two fired commanders, two Marines have been involuntarily separated from service, another has been jailed and 30 others have faced some form of reprimand for actions related to the scandal, said Marine Maj. Iain Pedden, leader of the Marine Corps’ military justice branch.

The Naval Criminal Investigative Service has identified 78 active-duty and reservist Marines as persons of interest in a range of activities related to the Marines United scandal, Pedden said Tuesday. To date, 45 cases have been adjudicated, 30 have been sent to commanders for disposition and three others are continuing to be investigated by NCIS.

Most of the Marines who have been punished have avoided a court-martial. Twenty-three received an adverse administrative action, typically a letter of reprimand in their official record, and seven have received some form of non-judicial punishment, which can include a reduction in rank or temporary dock in pay, Pedden said.

The single Marine who has faced a court-martial on charges of sharing explicit photographs was sentenced in July to 10 days confinement, a demotion of three ranks and forfeiture of two-thirds of his pay for one month, the Marine Corps said. The male, enlisted Marine was not identified.

Walters said Tuesday that the Marines is working to build a culture of acceptance among all Marines from the time that they are recruits until their last day in the Corps. He said the service is analyzing adjustments that it could make to several programs to aid that culture adjustment.

Changes the Marines are studying include fully integrating female recruits into training at the service’s two recruit depots at Paris Island in South Carolina and San Diego in California, he said. Women only attend basic training on Paris Island now and are assigned to female-only units.

Walters declined to speculate when a decision about integrating women into boot camps would be made, saying it was only in the “analysis phase.”

“If we’re going to change the culture of the Marine Corps, we need to change the way we are organized,” he said. “We are looking at all options … This is not small task, and it will take some time.”