James Baker had body armor on and a semi-automatic pistol strapped to his hip as he slung a short-barreled rifle... 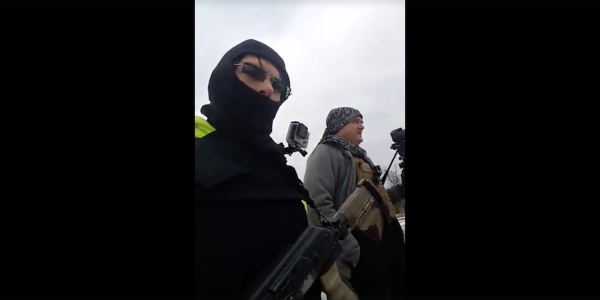 James Baker had body armor on and a semi-automatic pistol strapped to his hip as he slung a short-barreled rifle over his chest and pulled a black ski mask over his head. His buddy, Brandon Vreeland, a fellow open carry advocate, also had on body armor but left his gun in the car, instead bringing along cameras to videotape the encounter that was about to take place.

The two men wanted to file a complaint about being pulled over earlier by Dearborn police officers, but also saw it as an opportunity to test the suburban Detroit department to see if its officers “honored” the Constitution and their right to carry guns.

When the two men walked into the lobby of the Dearborn Police Headquarters on Michigan Avenue on Sunday afternoon, just about what you would expect would happen happened.

Police officers with guns drawn were waiting, and a tense standoff occurred as the two men initially refused to comply with orders to drop to the ground as they argued they had a right to carry weapons.

“Put it on the ground or you are dead,” one of the officers screams in the video that was live-streamed on the Internet via cell phones by Baker and Vreeland as the confrontation unfolded. “I will shoot you. I will put a round in you. What the hell is the matter with you?”

Baker insists his guns are legal, but police insist he put them down. The video goes blank, but audio recording continues and the confrontation ends without gunshots.

Both men were placed under arrest.

On Monday, the Dearborn Police Department and a statewide open carry group condemned the two men’s action as irresponsible and reckless.

“I find this behavior totally unacceptable and irresponsible,” Police Chief Ronald Haddad said in a statement Monday afternoon. “This is not a 2nd Amendment issue for me. We had members of the public in our lobby that fled in fear for their safety as these men entered our building.”

“Let us be clear, Michigan Open Carry Inc. in no way supports the actions of these individuals,” Lambert said. “It is our belief that their actions were reckless and primarily designed to draw attention and a response.”

Lambert said his group advocates the lawful open carrying of a holstered handgun for the purposes of self-defense, noting thousands of people do it every day without incident.

Baker. 24, of Leonard couldn't be reached for comment Monday, but Vreeland told the Free Press that both men are legal gun owners and Michigan law allows them to carry their weapons openly. Vreeland, 40, of Jackson said he left his own rifle in his car before walking into the police station.

“We audit police to see how well they honor the Constitution and people's rights,” said Vreeland, who was free after posting $1,500 bond late Sunday night. “We showcase police abuse and abuse of police power in the totalitarian police state that we live in.”

Vreeland said he and Baker went to the police station to complain about Dearborn officers stopping them earlier in the day.

“No laws were broken,” he said. “If we had to defend ourselves in a gun battle, I'd rather be armed.”

The video begins with the two men in the parking lot of the police department. Baker is wearing a ski mask that covers his mouth.

“We're going to file a complaint because we were illegally pulled over,” Baker says on the video. “We felt a little afraid we were pulled over, so we figured we better protect ourselves.”

Vreeland told the Free Press that he and Baker planned to audit Dearborn police to gauge how well they respect the rights of gun owners to openly carry weapons. Vreeland has conducted more than two dozen similar audits, posting video of them on the Internet.

They stopped in a store parking lot near police headquarters to put on their body armor.

“Someone saw us putting on the body armor and called the police,” Vreeland said. “Because of the reaction we saw yesterday, we always wear body armor.”

Vreeland said he and Baker were arrested by multiple police officers and later held for about eight hours in the police department lockup.

The lobby confrontation followed an earlier encounter on the street, which was recorded in a separate video. Dearborn police stopped the men in their car and asked to search it after the reports of them suiting up in body armor.

In that video, the pair refuse permission to search and Vreeland is heard saying “go (expletive) youself” as he pulls away from the officer.

Baker is charged with breaching the peace, failure to cooperate with police and masking his identity by obscuring his face when he walked into the station. He has not been arraigned on the charges, which are misdemeanors.

Vreeland is charged with breaching the peace, obstructing police and failure to cooperate. Both men are free on $1,500 bond while they await arraignment on the charges.