Two U.S. soldiers have been accused of smuggling 9 pounds of methamphetamine worth about $12 million hidden in cereal boxes... 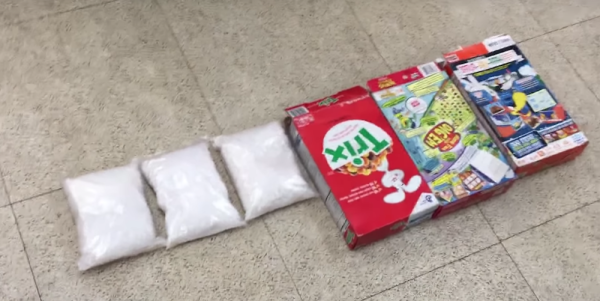 Two U.S. soldiers have been accused of smuggling 9 pounds of methamphetamine worth about $12 million hidden in cereal boxes sent via the military postal service, South Korean prosecutors said.

Prosecutors allege that the soldiers, who were based at Camp Humphreys, arranged for the drugs to be shipped from California to an Army Post Office address.

Two South Koreans also have been arrested, and four other South Korean suspects with relatives in the United States are wanted in the case.

One of the soldiers has been arrested and jailed on a charge of violating the narcotics control act; the other was indicted on the same charge without detention, according to a statement from the Pyeongtaek Branch Prosecutor’s Office.

The statement said the soldiers were both 20 and had the rank of private first class but did not otherwise identify them. U.S. Forces Korea did not immediately respond to a request for comment.

Customs officials at Incheon International Airport confiscated the drugs in December after an X-ray scan found them hidden in cereal boxes that were part of care packages being sent to the soldiers.

Prosecutors said the meth seized had a street value of 13.6 billion South Korean won, or $12 million, and could potentially have been used by 130,000 people.

“It’s the largest amount of drugs found coming through the APO,” senior prosecutor Kang Susanna said in a telephone interview.

The Pyeongtaek office, which is under the Suwon district office, worked closely with police, the airport customs office as well as U.S. military investigators and the Drug Enforcement Agency, the statement said.

The soldier who was not detained is accused of receiving the drugs at his APO address and giving them to the other soldier who then handed it over to a civilian off post. Prosecutors said the suspects planned to sell the drugs.

The transaction was part of a smuggling ring that had a front in Seoul’s Gangnam neighborhood, where investigators also found more than 3 ounces of methamphetamines and a smaller amount of cocaine in a safe, a statement said.

The Military Postal Service Agency provides U.S. mail services overseas to the military and other defense department employees. American diplomats have a similar service. The mail in South Korea is received at the joint military terminal at the Incheon international airport outside Seoul.