Two United States military veterans, Chad Jukes and Charlie Linville, are attempting to make history by being the first combat... 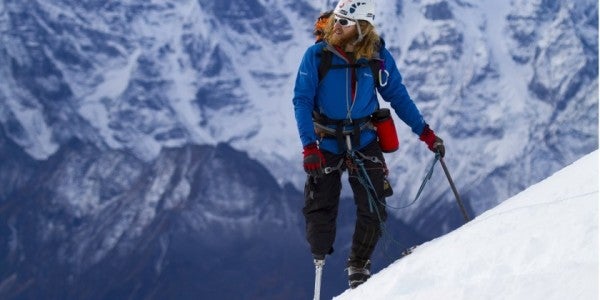 In 2006, Jukes was serving as a an Army staff sergeant in Iraq when he lost part of his right leg to a roadside bomb, reports USA Today.

When Lenville was deployed to Afghanistan in January 2011 as a Marine explosive ordnance disposal technician, he stepped on a buried explosive device. His right leg was amputated below the knee after a number of surgeries.

Although both veterans are climbing with different groups, their motivations are similar and both have become skilled mountain climbers in the years following their injuries. Linville is making his third attempt to reach the top of Everest, and Jukes has climbed mountains from Yosemite, California, and Ecuador, to the Himalayas.

Related: Working through the invisible wounds of war »

The two veterans are climbing with separate parties and have different sponsors, but will be taking the same northern route, which features a daunting final approach to the top. The climbers will be at above 26,000 feet for 24 hours as they struggle to reach the peak of the world’s highest mountain.

Retired Staff Sgt Chad Jukes packed and ready to go via Expedia! This man has an inspiring story and incredible drive to…

Posted by USX – U.S. Expeditions and Explorations on Thursday, April 7, 2016

Linville left for Nepal around the same time, and has since arrived in Kathmandu, the capital. He is expected to arrive in Lhasa, Tibet, on April 11. In an email to Task & Purpose, Zach Rosenfield, a spokesperson for Linville’s sponsor, The Heroes Project, explained that Linville would then travel to Mount Everest’s base camp for his climb.

TODAY, Charlie leaves for Nepal to conquer Mount Everest. Drop some words of encouragement for Mr. Linville in the comments below.

Posted by The Heroes Project on Wednesday, April 6, 2016

The motivation for 30-year-old Linville is similar. He hopes climbing the world’s highest mountain will put an end to misplaced pity.

“When I got hurt, people were sweet, but at the same time, they pitied me. I can take the staring and I can take the pointing, but I can't take people feeling sorry for me,” Linville said in an interview with People Magazine. “So to get on one of these mountains and to accomplish something most able-bodied people can't, it would be like vanquishing that demon that was left behind by the war.”