While it can be difficult to peg down just how star-spangled a state is, one indicator is the rate at which citizens enlist in the military, especially during the United States' longest period of sustained conflict. 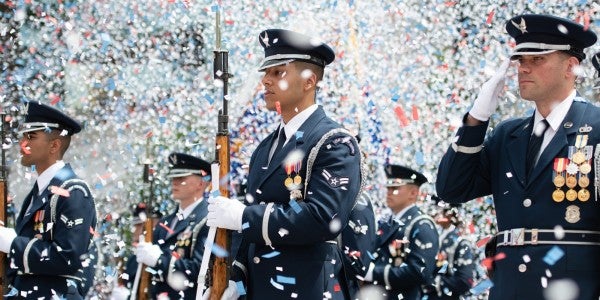 While it can be difficult to peg down just how star-spangled a state is, one indicator is the rate at which citizens enlist in the military, especially during the United States’ longest period of sustained conflict. At least, that’s the thinking behind WalletHub’s new study, 2019’s Most Patriotic States in America.

For the fourth year in a row the personal finance site took a close look at metrics in military and civic engagement to determine which states “bleed the most red, white and blue,” their website reads. Based on those metrics, the top-five “most patriotic” states were New Hampshire, Wyoming, Vermont, Utah and Idaho. (The study did not include statistics for U.S. territories.)

“We’ve been conducting this study annually since 2015. Over the past three years, we’ve noticed a very slight decrease in the average number of military enlistees on a national scale, as well as in the number of veterans,” WalletHub’s analyst, Jill Gonzalez, told Task & Purpose.

According to the June 24 study the states with the highest average number of military enlistees (apparently officers are excluded when it comes to measuring just how “America, Fuck Yeah” a state is) Georgia ranked highest, followed by Alaska, South Carolina, Texas, and Alabama. On the opposite end of the spectrum, the states with the lowest rate of enlistment were: Minnesota, Vermont, Rhode Island, Massachusetts, with North Dakota at the bottom.

When it comes to a state’s veteran population, Alaska took the lead, followed my Montana, Virginia, Maine and Wyoming. On the opposite end, the study lists Utah, Massachusetts, California, New Jersey and New York.

On the civic engagement side, the study looked at the share of adults who voted in the 2016 Presidential and Primary elections; the share of adults who took part in community groups, organizations, or volunteered, as well as hour many hours they spent; participation in AmeriCorps and the Peace Corps were also tracked; as well as how often a state’s residents actually answered their jury summons.

The top states for civic engagement were Vermont, Utah, Minnesota, Wisconsin, and New Hampshire. The states with the lowest levels were: Hawaii, Texas, California, New mexico, and Georgia.

For their study, WalletHub sourced their data from the U.S. Census Bureau, the Department of Veterans Affairs, Defense Manpower Data Center, Corporation for National & Community Service, Peace Corps, Military OneSource, United States Elections Project, Administrative Office of the United States Courts and Center for American Progress, according to their website.

You can check out the full breakdown from WalletHub study on 2019’s Most Patriotic States In America, below:

Update: This article has been updated to note that the study did not include statistics for U.S. territories.