2300 US Soldiers Headed To Afghanistan This Winter

The Army will deploy an armor brigade and an aviation brigade totaling about 2,300 soldiers to Afghanistan this winter as... 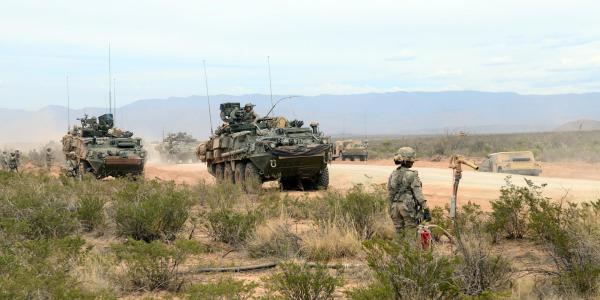 The Army will deploy an armor brigade and an aviation brigade totaling about 2,300 soldiers to Afghanistan this winter as Afghan forces struggle to contain a Taliban resurgence there, the service announced Thursday.

In addition, the Army announced a third deployment Thursday of 3,000 soldiers from the 3rd Armored Brigade, 1st Cavalry Division at Fort Hood, Texas, to deploy to Kuwait this winter.

The 1st Brigade’s assignment is a routine deployment in support of Operation Freedom’s Sentinel, the U.S. mission to train Afghan forces and conduct counterterrorism operations against terrorists including al-Qaida and the Islamic State group.

The unit, outfitted with Stryker troop-carrying vehicles, will focus on ‘advise and assist’ missions to strengthen the ailing Afghan security forces near the city of Bagram in the northeast portion of the country, Payne said.

Soldiers with the 16th Combat Aviation Brigade will help their Afghan counterparts, who are pushed to their limits in air medevac operations in the fight against the Taliban, al-Qaida and the Islamic State group.

In one week in August, medevac flights across the country recovered 125 dead Afghan troops and 280 wounded, the Washington Post reported. By comparison, the worst month for U.S. forces in Afghanistan was in August 2011, when 71 troops were killed.

Operation Enduring Freedom, launched in 2001 to dislodge al-Qaida and the Taliban in Afghanistan, was reflagged to Operation Freedom’s Sentinel in 2014 to reflect the new role for U.S. troops. NATO agreed to extend operations there beyond 2016, the U.S.-led coalition said in May.

The 3rd Armored Brigade will stay combat-ready in Kuwait, as operations continue against the Islamic State group in Iraq and Syria.