The Navy’s Newest Fleet Is Bulking Up For ‘Leaner, Agile’ Operations To Counter Russia In The Atlantic And Arctic

In the six months since its activation, the Navy's 2nd Fleet has bulked up and is embracing its mission in the North Atlantic and the Arctic, where the U.S. and its partners are focused on countering a sophisticated and wily Russian navy 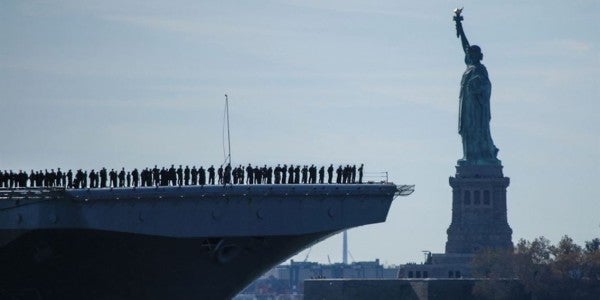 In the six months since its activation, the Navy's 2nd Fleet has bulked up and is embracing its mission in the North Atlantic and the Arctic, where the U.S. and its partners are focused on countering a sophisticated and wily Russian navy.

The 2nd Fleet was deactivated in 2011 for budget reasons — 65 years after being set up to deter the Soviet Union in the Atlantic and around Europe. Most of its assets were shifted to Fleet Forces Command.

The fleet returns amid a shift toward a potential great-power conflict, but the new version will differ from its predecessor by being “leaner, agile, and more expeditionary,” Rear Adm. John Mustin, the fleet's deputy commander, said Wednesday at the Surface Navy Association's annual symposium.

“When I say lean, what does that mean? The staff complement is organized and billeted to be operational. The majority of staff will focus on operations, intelligence, plans and training,” Mustin said.

Questions have been raised about how 2nd Fleet will integrate with other numbered fleets — particularly 6th Fleet, which oversees waters around Europe, and 4th Fleet, which is responsible for the Caribbean Sea and waters around Central and South America — but Navy officials have said the goal is not to draw stark lines in the sea.

The 2nd Fleet's primary focus will be working with 6th Fleet and 4th Fleet “to ensure a seamless command and control for force employment — ensuring there is no vulnerability, no seam in the Atlantic,” Lt. Marycate Walsh, a spokesperson for 2nd Fleet, told Business Insider in December.

Prior to its deactivation, 2nd Fleet was mostly a training command for units getting ready to deploy.

Now, however, the focus is “to develop and dynamically employ maritime forces ready to fight across multiple domains in the Atlantic and Arctic,” Mustin said at the symposium.

“Previously, forces reported to 2nd Fleet when they entered the fleet's geographic area of operations. Under the new model forces will be assigned once in the final stage of the training cycle and through the end of the period in which forces are available for operational tasking, unless the unit transitions to the control of another numbered fleet,” Walsh told Business Insider in December.

“This allows 2nd Fleet to focus its attention on the development and employment of forces at the highest level of warfare,” Walsh added.

Like the stand-up of 2nd Fleet, the Navy's first East Coast use of Surface Warfare Advanced Tactical Training — a Top Gun-like exercise meant to impart advanced knowledge of weapons and tactics to surface crews — is part of the effort to train for warfare against an enemy fleet.

Mustin said during his remarks that he was the 18th staff member to report to 2nd Fleet and that by March the command will have 85 people assigned — a “number that will continue on a glide slope that is increasing rapidly,” he said.

To avoid bloat and redundancy, the 2nd Fleet will work with Fleet Forces whenever possible, Mustin said. Both commands are based in Norfolk, Virginia. Ships will be under Fleet Forces' operational command, while 2nd Fleet will have tactical control.

But the fleet is growing to be fit for purpose and fit for its time, Walsh told Business Insider.

“It makes sense to describe 2nd Fleet in terms of capability rather than in terms of the number of personnel assigned,” Walsh said. Most of the personnel assigned to it will focus on operations, intelligence, plans and training, “with only a few staff members focused on higher headquarters administrative functions.”

Mustin also told attendees at the symposium that they could expect 2nd Fleet personnel to be roaming their area of operations — working from forward posts on command ships or from austere locations ashore — while keeping in touch with home base in Norfolk.

Those personnel will include staffers from allied countries and other partners who are fully integrated rather than assigned as liaisons, said Mustin, who added that surface warfare officers interested in the 2nd Fleet had been approaching him at the symposium.

Moreover, plans are to rotate Navy reservists through the fleet to work alongside active-duty sailors, with the goal of keeping those reservists up-to-date. “This is not your grandfather's 2nd Fleet, or, as my staff likes to point out, my father's 2nd Fleet,” Mustin said.

The 2nd Fleet will also work on development in other aspects of naval warfare.

Working with the Naval War College and the Warfare Development Centers, the fleet “will be a hub for the Navy's concept development and implementation, ensuring that when the Navy operates around the world, it is prepared to compete, fight, and win in great-power competition,” Walsh told Business Insider in December.

In September, the Center for Executive Education at the Naval Postgraduate School led 2nd Fleet staff in a seminar to develop the fleet's mission set, and in coming months the 2nd Fleet will work with the Naval War College on staff training to “ensure the fleet is equipped to command and control naval forces at the highest level of warfare,” Walsh said, adding that most 2nd Fleet staff will attend the school's College of Maritime Operational Warfare.

“Going forward, this same kind of integration applies to the employment of the naval forces 2nd Fleet commands,” Walsh added.

SEE ALSO: The Navy's Secret Investigation Into The USS Fitzgerald Collision Details A Disaster That Was Just Waiting To Happen

WATCH NEXT: The Launch Of The Future USS St. Louis