For most of the past year, officials have been building a new unit at Fort Bragg. They’ve welcomed new soldiers... 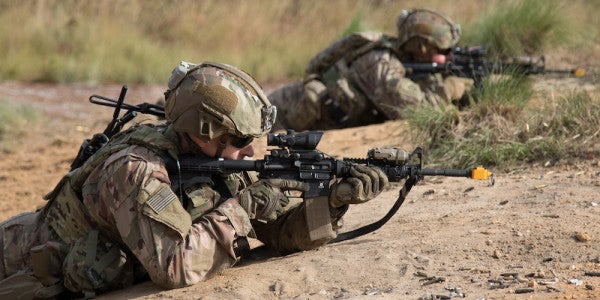 For most of the past year, officials have been building a new unit at Fort Bragg.

But the most important building blocks for the 2nd Security Force Assistance Brigade were laid out amid Fort Bragg’s sprawling training areas. That’s when the soldiers of the 2nd SFAB came together for the first time as advisor teams working amid the types of combat scenarios they could face in Afghanistan next year.

“This was our first time together as a team,” said Capt. Zachery Long, who leads Combat Advisor Team 2213 in 2nd Battalion, 2nd SFAB. “We had never worked with each other before.”

As part of a live fire exercise, advisor teams were thrust into increasingly complex scenarios and forced to adapt on the fly to an ever-changing environment.

“It was definitely like building an airplane in flight,” Long said.

Team 2213 is comprised of seasoned soldiers from a variety of backgrounds.

There’s Long and his team sergeant, Sgt. 1st Class James Lewis, and nine other soldiers who come from backgrounds in the infantry, signal, artillery, logistics, medical and maintenance fields.

Most joined the 2nd SFAB in June or July, officials said. But they had been involved in individual and occupation-specific training prior to the October exercises at Fort Bragg.

That training, the first in which the teams operated as a cohesive unit, was meant to prepare the brigade for its biggest test yet – a rotation to the Joint Readiness Training Center at Fort Polk, Louisiana, early next year.

At JRTC, the brigade will be validated ahead of its spring 2019 Afghanistan deployment, which the Army announced earlier this year.

Long said his team will be ready.

“They want to be here and they’ve proven they deserve to be here,” he said.

They responded to roadside bombs and quickly evacuated wounded troops. But observers worked to ensure the training iterations did not become too repetitive or predictable.

As one advisor team made its way down a thin dirt trail lined by pine trees, an observer noted the soldiers brought only one combat litter to carry an injured soldier.

The trail led to a berm where the soldiers knew they would make a stand against an unseen enemy before calling in an artillery strike and moving back to their vehicles.

Based on earlier iterations of the training, the soldiers knew that one of their own would be injured in the attack.

Observers selected one of the largest soldiers on the team to be a victim. And then, as soldiers took turns carrying the solder back to the vehicle, added an unexpected wrench into the training.

Another soldier was given a mock injury and needed to be carried, without a litter, back to the vehicles.

All the while, the soldiers had to provide their own security.

“There are no short cuts,” an observer said.

Long said the training isn’t supposed to be easy.

Under the pressure of a combat scenario, he said, leaders can get a feel for the makeup of their team, learn who can be trusted and identify areas of improvement.

“It’s a shared hardship,” he said.

“There are no short cuts”

“It’s shocking to watch a team evolve,” he said. “Shocking in a good way.”

Lewis, the team sergeant, said each of the soldiers in the SFAB has been assessed and selected.

They come from the best the Army has to offer, he said. And that shortens the learning curve needed to prepare for their deployment.

Lewis said the team learned from each training repetition and, at the same time, built the confidence it will need at JRTC and in Afghanistan.

“Everybody learned very quickly,” he said. “We’re much more familiar with each other.”

Each combat advisor team will include a mix of military occupational specialties.

But the soldiers also understand they cannot specialize. In the weeks and months ahead of their deployment, each will be cross-trained in skills not typical to their specific jobs.

“You have to be trained on everything,” said Staff Sgt. Jack Lincoln, an infantry soldier. “You have to get out of your comfort zone.”

That means that each soldier on the team must be able to fill in and help with communications, fire support and vehicle maintenance.

The brigade has adopted the motto “Everyone fights.” And to that end, soldiers must be prepared to step in if one of their teammates is injured or unavailable.

That means Sgt. Desja Williams is leading training on how to make repairs to the team’s MaxxPro armored vehicles. And Sgt. Tyler Twigg is hosting medical training.

The training will ultimately make the team better, Long said. But it also will prepare soldiers for training Afghan troops in similar skills.

“Part of how we prepare for the deployment is teaching each other,” he said.

The 2nd SFAB is only the second unit of its kind in the U.S. Army and is comprised of about 800 soldiers.

The 1st SFAB, based at Fort Benning, Georgia, recently returned from Afghanistan. And the Army is standing up four other SFABs, to be located at Fort Hood, Texas; Fort Carson, Colorado; Joint Base Lewis-McChord, Washington; and one in the National Guard.

The new units are part of a fundamental change to how the Army conducts long-standing missions in countries like Afghanistan.

The units are smaller and more specialized than a brigade combat team, which includes about 4,500 soldiers. And its members are assessed and selected before training to join their unit.

Officials believe the units will free up traditional brigade combat teams to train for near-peer fights instead of advise-and-assist missions in Iraq and Afghanistan.

SEE ALSO: The 1st SFAB’s Afghan Deployment Is A Moment Of Truth For The Global War On Terror