He entered the house expecting a romantic evening with the woman he loved. Instead, three men wearing hockey masks beat... 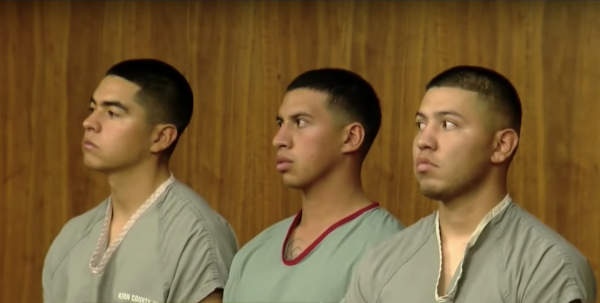 He entered the house expecting a romantic evening with the woman he loved.

Instead, three men wearing hockey masks beat him, bound him with zip ties and threatened to kill him. They released him 30 minutes later after taking his cellphone and wallet, and warning him they knew where he lived.

The men who assaulted him weren’t gang members or criminals with lengthy rap sheets, but U.S. Marines who carried out the attack because they believed the victim was having an affair with one of their wives.

The men, who have since been discharged from the Marine Corps, pleaded no contest to a count of first-degree robbery in July. Other charges, including torture, were dismissed under the plea agreement. They faced a life term if convicted of the torture charge.

The victim, Norman Early III, told the court before sentencing that the men who attacked him never deserved the honor of being Marines. He said they were “animals” who should be removed from the streets before they hurt anyone else.

The defendants will never understand the suffering he’s gone through, both physically and psychologically, Early said.

“I knew what my fate was,” Early told the court of the beating. “I was going to be murdered.”

His kidneys failed at one point while he was recovering in the hospital and he was placed on dialysis. Doctors don’t believe he’ll need further dialysis treatments, according to statements made in court.

Early said for months after the assault he was afraid, wondering if he was about to be ambushed again.

Judge John S. Somers said the defendants were lucky they weren’t facing life terms given how badly Early was beaten.

Asked by Somers why the plea was offered, prosecutor Brad Taconi said he didn’t believe he could prove some of the charges beyond a reasonable doubt. He said the plea agreement provided “significant” punishment for the defendants, none of whom had prior criminal records.

After the hearing, Medina’s attorney, H.A. Sala, said the incident occurred as a result of Early pursuing a romantic relationship with Medina’s wife while Medina was deployed overseas. The wife, Diane Reyes, tried breaking it off, but Early persisted.

She eventually told Medina, who gathered Sanchez and Ortiz at the house before luring Early there. Sala contends Early became confrontational, then tried to strike or punch Medina after a heated verbal exchange.

That evidence would have been presented at trial, but Sala said he and the other defense attorneys couldn’t risk a jury finding the torture allegation true.

“This was such a favorable settlement for these guys given what they were facing,” Sala said.

Another reason Medina accepted the plea agreement was that a jury likely would have convicted him of the robbery with an enhancement for inflicting great bodily injury since the evidence indicated he took Early’s wallet, Sala said. Medina would have faced a total of six years for that conviction alone.

Kyle J. Humphrey, the lawyer representing Sanchez, said his client knew from the day of the incident that what he did was wrong. He said Sanchez was “raised by good people with good values” and made a horrible mistake, one that cost him a military career.

While the defendants’ actions were criminal, Humphrey took issue with Early portraying himself as someone who was blameless for what happened.

“You don’t want to be sniffing around another man’s wife,” Humphrey said.

Attorney Richard Middlebrook, representing Ortiz, said this was an unfortunate situation for all involved and the defendants’ lives are forever changed.

“Any time these situations happen, it’s awful for any family,” said Middlebrook, who also expressed sympathy for Early. “The only thing they wanted to do was be Marines.”

Middlebrook said there was never any intention on the part of the defendants to kill or permanently injure Early. He said their training kicked in and they acted as they would have overseas by binding and interrogating someone.

They couldn’t have foreseen the medical reaction Early would have from being bound and that his kidneys would fail as a result, Middlebrook said. The defendants’ actions, he said, also speak to a larger problem regarding soldiers returning home.

“They come back from seeing some pretty crappy things, and there’s no process to get them accustomed to what’s normal and what’s not any longer,” he said.

According to court documents, the defendants used Reyes’ phone to lure Early through a Snapchat conversation on Sept. 20 to a house in the 2800 block of Lee Drive, east of South H Street and north of White Lane. When he entered, the defendants beat him and forced him to the ground.

They tied his wrists with zip ties and wrapped a belt around his neck, nearly causing him to lose consciousness, the documents say. When asked what he was doing there, Early said he was supposed to meet Reyes.

The defendants held him captive for 30 minutes, releasing him only after threatening to kill him if he went to police, the documents say.

Early managed to drive away and parked at a 7-11 near Real Road where he punched his vehicle’s OnStar button for medical assistance. He was taken to a local hospital with an orbital fracture, bruising to his head and body, and swelling to his head and neck.

Soon afterward, police stopped Medina in a vehicle, and found Sanchez and Ortiz at a residence in the 5500 block of Monitor Street. Medina admitted to assaulting Early, and helped police locate some of the stolen items, the documents say.