3 French Cops Accidentally Ship Out On The USS Eisenhower

The USS Dwight D. Eisenhower steamed away with some unexpected passengers after a port visit this week in southern France.... 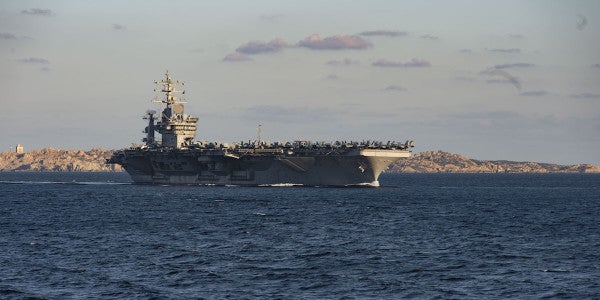 The USS Dwight D. Eisenhower steamed away with some unexpected passengers after a port visit this week in southern France.

Three Marseille police officers, who were working security for the aircraft carrier, found themselves stuck on the moving vessel Tuesday after stepping aboard for a last-minute tour, according to a report from U.S. Naval Institute News.

The officers, who did not speak English, spent about an hour on the Ike before heading back to port on a tug boat, the report said.

A Marseille official told a French newspaper the officers “will be subject to disciplinary sanctions,” USNI News said.

The Eisenhower last made unusual headlines in September after a sailor unexpectedly gave birth to a baby girl while the carrier was underway in the Arabian Gulf.

Formula, diapers and an incubator for the baby’s evacuation were flown to the ship, Cmdr. Bill Urban, 5th Fleet spokesman, told Stars and Stripes.

The sailor hadn’t reported being pregnant, and the chain of command wasn’t aware she was expecting a baby, he said.

The Eisenhower Carrier Strike Group is heading home to Virginia after a seven-month deployment to the 5th and 6th Fleet area of operations.