A Taliban suicide bomber blew himself up outside of a US military base in Afghanistan on Wednesday in retaliation for... 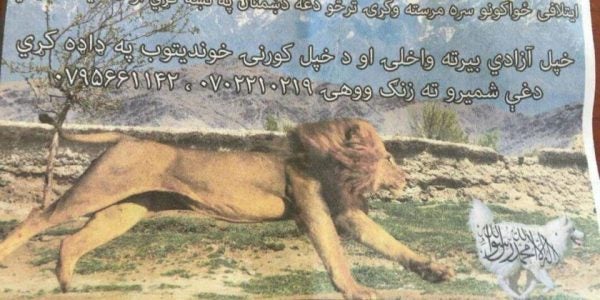 A Taliban suicide bomber blew himself up outside of a US military base in Afghanistan on Wednesday in retaliation for the US dropping leaflets that were offensive to Islam the day before, according to the Los Angeles Times.

Three US soldiers were wounded and an Afghan interpreter was killed, the Washington Examiner reported Thursday, in the blast that occurred at an enemy-control point outside of Bagram Airfield, the LA Times and Reuters reported.

Taliban spokesman Zabihulla Mujahid tweeted Wednesday that the bombing was to “avenge” the insulting leaflets.

Jesus Christ on a pogo stick. This is a propaganda leaflet the US military distributed in Afghanistan a few days ago./1 pic.twitter.com/Gr3Zv5B8LT

The leaflets the US dropped from a plane on Tuesday in Parwan province pictured a lion, symbolizing the US-led coalition, chasing a dog, which symbolized the Taliban.

Dogs are considered an unclean and dangerous animal by many Afghans, according to The Washington Post, and the one depicted on the leaflet had part of the Taliban flag superimposed on it along with a common Islamic creed.

“There is no God but Allah, and Muhammad is his prophet,” the creed, known as the shadada, reads.

“Get your freedom from these terrorist dogs” was also written on the leaflet above the two animals, the LA Times said. “Help the coalition forces find these terrorists and eliminate them.”

The Taliban also released a statement on Wednesday that the leaflets showed the US's ” utter animosity with Islam,” The Post reported.

Maj. Gen. James Linder released a statement on Wednesday saying that the “design of the leaflets mistakenly contained an image highly offensive to both Muslims and the religion of Islam. I sincerely apologize.”

“We have the deepest respect for Islam and our Muslim partners worldwide. There is no excuse for this mistake,” he said. “I am reviewing our procedures to determine the cause of this incident and to hold the responsible party accountable. Furthermore, I will make appropriate changes so this never happens again.”

Many Afghan civilians were also irate with the leaflets.

“It is a very serious violation. The people are very angry. It is a major abuse against Islam,” the Parwan province police chief, Mohammad Zaman Mamozai, told The Post.

“Why they do not understand or know our culture, our religion and history?”

“The foreign forces don’t have any idea of what are the values of the Afghan people,” Ahmad Shaheer, an analyst living in Kabul, told the LA Times. “They’ve hired some interpreters and advisors who only know how to speak English, make money and gain trust, but really are strangers to the real values of the local people.”

The US has been at war in Afghanistan for almost 16 years, and President Donald Trump recently announced he would be deploying more American forces — about 4,000 by most estimates — to the war-torn country.