3 World War II veterans attended the State of the Union. Here are their incredible stories

Those three tough, 90-something World War II veterans sitting directly behind first lady Melania Trump at the State of the Union address Tuesday night embodied the spirit of commitment to a cause that President Donald Trump was trying to get across in his speech 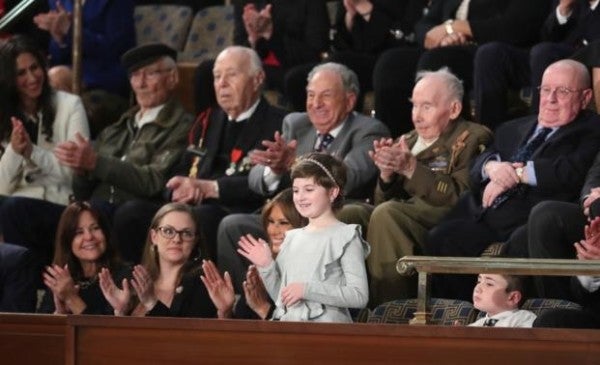 Those three tough, 90-something World War II veterans sitting directly behind first lady Melania Trump at the State of the Union address Tuesday night embodied the spirit of commitment to a cause that President Donald Trump was trying to get across in his speech.

One of the three, former Pvt. 1st Class Joseph Reilly, recently showed that he hasn't lost the edge he had with the 101st Airborne while parachuting into France as part of the June 1944 D-Day invasion, then going on to fight at Bastogne in the Battle of the Bulge.

Following the address, San Diego County Supervisor Nathan Fletcher posted a video of Reilly at an event railing against the re-emergence in some quarters of the same bigotry he fought against in the war to liberate Europe from the Nazis.

In a powerful voice, the 97-year-old Reilly, of Santee, California, said, “I'm disappointed with some of the people in our nation who treat people differently because of the color of their skin, or their ethnicity, or their religion. We're a better country than that. Knock that crap off. Not in our country.”

In his speech, Trump noted that this June the nation will mark the 75th anniversary of the D-Day landings, when “15,000 young American men jumped from the sky, and 60,000 more stormed in from the sea, to save our civilization from tyranny.”

“Here with us tonight are three of those heroes: Private First Class Joseph Reilly, Staff Sergeant Irving Locker, and Sergeant Herman Zeitchik. Gentlemen, we salute you,” the president said.

Locker and Zeitchik were Jewish kids from New Jersey when the war broke out. They were fated to be present when the Nazi extermination camps were liberated by U.S. forces.

In a video for Mission BBQ, a Maryland restaurant with a patriotic theme, Zeitchik said he was 18 years old and playing stickball in Linden, New Jersey, when another kid called him over to listen to a car radio. It was President Franklin D. Roosevelt, announcing that the nation was at war.

The next day, Zeitchik said, his father took him to the post office to register for the draft. Who could have guessed then that Zeitchik would become a French “Chevalier,” or knight, decorated with the French Legion of Honor for aiding in the liberation of Paris?

At D-Day, “a lot of those landing craft were hit by gunfire,” Zeitchik said. “Of course, we had a lot of casualties. We were lucky we made it through.”

He also fought at the Battle of the Bulge, but one of his fondest memories of the war was of being among the first U.S. troops to enter Paris. He said they pulled in at night and slept in the streets. The next morning, the Parisians saw them and the celebration began.

“It was one heyday for the Americans. Paris was saved,” Zeitchik said.

He said that being a soldier was part of the service to the nation owed by all Americans.

Former Staff Sgt. Irving Locker, a shoemaker's son from Passaic, New Jersey, said the hard part about D-Day was simply getting ashore. He was in charge of a gun in an anti-aircraft artillery battery, and all members of his unit were weighed down with heavy equipment and ammunition.

“By the time we transferred to the Higgins boat, we were scared, we were sick and that's how we came in. There's 30 of us standing in a row on the Higgins boat,” Locker said, and the sailor driving the boat stopped short of the beach.

He said his lieutenant took out his sidearm, approached the sailor and said with a smile: ' “Either you take this boat closer so my men don't drown or you're never going to see your family again.'”

They made it ashore.

Locker also fought at the Battle of the Bulge and was present at the liberation of the concentration camps, where he witnessed “man's inhumanity to man.”

Locker, who knew Yiddish and some German, said he spoke to German civilians in the towns nearby. They would claim that they did not know what went on in the camps, or even of their existence.

“Their answer to me was, 'If I opened my mouth, I'd be in the camp.' It was self-preservation for the German people to keep their mouths shut,” Locker said.

Another guest at the State of the Union was Joshua Kaufman, a Holocaust survivor who was a prisoner at the infamous Dachau camp when it was liberated by the Americans, including Zeitchik.

Trump said that Kaufman “remembers watching through a hole in the wall of a cattle car as American soldiers rolled in with tanks. 'To me,' Joshua recalls, 'the American soldiers were proof that God exists, and they came down from the sky.”

Zeitchik “was one of the Americans who helped rescue Joshua from that hell on Earth,” Trump said. “Almost 75 years later, Herman and Joshua are both together in the gallery tonight, seated side by side, here in the home of American freedom. Herman and Joshua, your presence this evening honors and uplifts our entire nation.”