30,000 National Guard Troops Prepared To Assist In Response To Harvey

Pentagon officials said Tuesday that National Guard assets are at full readiness to assist in the unfolding disaster in Texas... 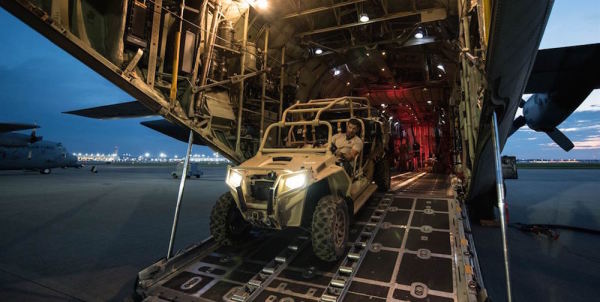 Pentagon officials said Tuesday that National Guard assets are at full readiness to assist in the unfolding disaster in Texas wrought by Tropical Storm Harvey.

Maj. Gen. James C. Witham, director of domestic operations for the National Guard, told Pentagon reporters that up to 30,000 guardsmen as well as a U.S. naval amphibious assault ship could be called upon to help out in rescue efforts on the ground.

There are 30 National Guard helicopters flying in Texas in support of relief efforts surrounding the hurricane and subsequent tropical storm, with 24 more requested, he said.

Witham said that could increase to 100 helicopters in the days ahead as the Guard prepares for a sustained, phased response — a departure from what the Guard has done in the past.

“This will be a long-term effort,” Witham said. “When the Guard responds to hurricane-type events, normally we talk about that first 72 to 96 hours for the lifesaving and life-sustainment that takes place. Then, we’re into the recovery effort.

“Due to the nature of this storm as it spun across southwest Texas for days and dumped historic levels of rainfall, our response has been very different than what we’ve looked at before,” he said. “And the planning associated had to be different because of the nature of it.”

The Guard has alerted thousands of forces across the nation for possible deployment. It has already sent elite special operations para-rescuers from California and New York to aid in the effort, he said.

“We are leaning as far forward as we possibly can to ensure that military assets are postured to support the needs of Texas and potentially Louisiana,” Witham said.

Texas Gov. Gregg Abbott has ordered the entire Texas National Guard, which numbers around 12,000 troops, to assist those affected by the storm. Only about 3,500 Texas guardsmen are now involved, which raised questions as to whether U.S. commanders in Washington had identified a bigger demand than Texas officials were willing to request.

Witham said, “Texas has been given everything that they’ve asked for” and that the Pentagon expects “more forces will be requested.”

“If you look at the magnitude and duration of this storm, we are just trying to anticipate additional needs on behalf of Texas,” he said.

The California Air National Guard from the 129th Rescue Wing in Mountain View had deployed about 90 guardsmen on Monday night.

“This is their wheelhouse,” said Capt. Will Martin, a California National Guard spokesman. “They carry out over-water rescue throughout the year and they have been in Texas before.”

The Bay Area wing was deployed to Texas in disaster response to Hurricane Rita in 2005, Hurricane Ike and Hurricane Gustav in 2008.