Navy and Air Force meet on the gridiron in Annapolis, Maryland, Saturday, Oct. 3, in what has become a great... 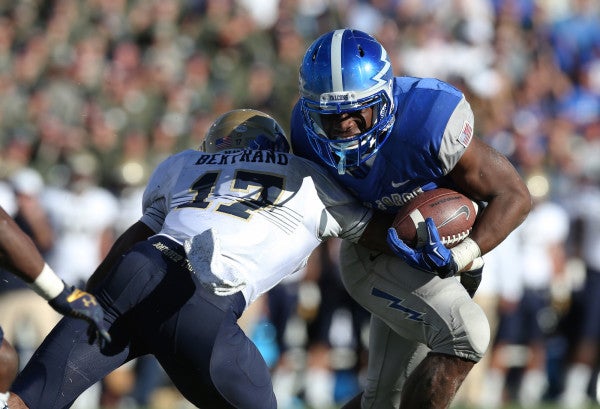 Navy and Air Force meet on the gridiron in Annapolis, Maryland, Saturday, Oct. 3, in what has become a great and competitive college football rivalry. This contest is the first game in the quest to win the Commander-in-Chief’s Trophy, the triangular football series between the three major service academy teams: the U.S. Military Academy Black Knights, the U.S. Naval Academy Midshipmen, and the U.S. Air Force Academy Falcons. The winning team of the series is invited to the White House to meet the president and has bragging rights among the service academies for the next year.

Most people know about the pageantry and tradition of the Army–Navy game, which recently has not been much of a rivalry with Navy currently owning a 13-game winning streak in the storied series. Unfortunately, the current team’s records (Navy 3-0; Army 1-3) predict that Navy’s victory streak will not end anytime soon.

While conventional wisdom says the Army–Navy game is here to stay as the premier service academy football rivalry, here are four reasons why the Air Force Falcons vs. Navy Midshipmen game is probably a better overall contest and rivalry.

1. The Air Force vs. Navy game is more competitive.

During Navy’s 13-year winning streak in the Army–Navy series, the Midshipmen have outscored the Black Knights 417 to 142. Most math majors (even those from Army) would agree those two numbers are not even close.

2. There is no love lost between the two teams.

Unlike Army and Navy, no matter how much Navy and Air Force express a mutual admiration publicly, the two teams don’t really like each other. It’s been that way for a while.

In 2006, after the Midshipmen’s fourth straight victory over the Falcons, then-Navy coach Paul Johnson came out of the locker room with a chip on his shoulder saying, “I'm proud to be the coach of one of the luckiest teams in America. We've been lucky four years in a row, any way you want to spin it.”

Evidently, Johnson was tired of hearing in the press that luck, and not his team’s execution, was the determining factor for Navy’s success against Air Force. Then-Air Force coach Fisher DeBerry denied making the “lucky” comments.

“He didn't hear it from our football team,” DeBerry said.

In 2011, Air Force won a wild overtime affair 35-34 that included a controversial taunting penalty by Navy. Navy’s then-quarterback Kriss Proctor ran for a one-yard touchdown to open the overtime, but was penalized for unsportsmanlike conduct after getting in an Air Force defender’s face. The resultant penalty forced Navy into a long conversion attempt from 35 yards out that was blocked by the Falcons. Air Force scored a touchdown on the ensuing possession and converted the point to defeat the Midshipmen on their home turf for the first time since 2002.

Even the Commander-in-Chief’s Trophy is not immune to the animosity between the two teams. In 2012, when Air Force had already lost to both Navy and Army, the trophy was delivered from Colorado Springs to the Army–Navy game for it to be awarded to the winner of that contest.

When the trophy arrived, there were questions about the care and state of disrepair the trophy appeared to be in, particularly to the Navy portion of the trophy. During its two years at Air Force, somehow Bill the Goat, the Navy mascot, acquired a crutch to prop him up on the trophy, sparking a mild outcry among the Midshipmen faithful.

3. The quality of team both teams is unmatched.

Since 2007, Air Force and Navy have combined for 14 bowl appearances with each team only missing one year when they did not qualify for a bowl. Army has been to one bowl in that same time span.

The Falcons are coming off a 10-3 season in 2014 where they defeated perennial powerhouse Boise State, won the Commander-in-Chief’s Trophy, and defeated Western Michigan in a bowl game. This year, Air Force put up a valiant fight against then-No. 4 Michigan State (now No. 4), losing 35-21 and has started the season at a respectable 2-1.

Navy is 3-0 and is receiving votes in both The Associated Press and USA Today/Coaches polls this week. The current team has a true superstar in record-setting quarterback Keenan Reynolds. Reynolds is poised to set the record for most career-rushing touchdowns in the NCAA history. He is currently tied for second in NCAA history among all players for rushing touchdowns, just four behind record-holder Montee Ball of Wisconsin. He currently has 24 wins as the Navy starting quarterback, more than 1963 Heisman trophy winner and Navy quarterback Roger Staubach.

Comparably, Army is currently 1-3 and lost to Fordham for the first time since 1891 in early September. The Black Knights have only had one winning season since 1997.

It’s pretty hard to impressively roll a lumbering M1 Abrams tank through the stadium and not crush the field of play, so the tank option probably does not get a nod for best pre-game pomp and circumstance. Even the Army AH-64 Apache helicopter, an impressive attack gunship, doesn’t quite hold a candle to an Air Force or Navy flyover. The Apache has a top speed of around 150 mph, making it slower than the new Corvette Stingray.

As every fighter pilot knows, “Speed is life.” Speed wins in football, flyovers, and quite possibly rivalries.