As the owner of a UPS Store, Randy Holst naturally values the safe delivery of packages from point A to... 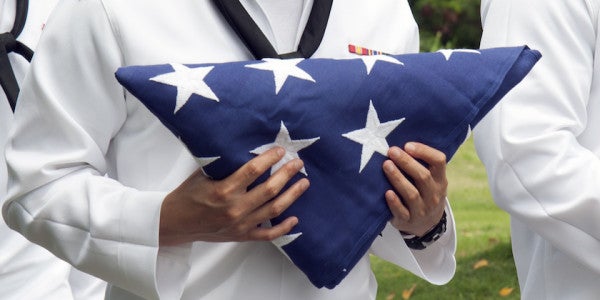 As the owner of a UPS Store, Randy Holst naturally values the safe delivery of packages from point A to point B. But he’s more persistent — and sentimental — than some people might be.

In January, after spending four years of searching for its rightful owner, Holst finally succeeded in delivering a lost box to a Georgia man.

The package was returned to Holst’s Golden Valley store two years ago after several attempts to deliver it failed. When Holst finally opened it, he saw a framed military funeral flag with spent shell casings, other military memorabilia, a funeral registry book, newspaper clippings, drawings, even a game of Scrabble.

“You wouldn’t toss a memory like that,” Holst said. “I can’t imagine anyone would.”

He knew it had to be important to someone, so he called the Veteran’s Administration. When that agency couldn’t help, he started searching the internet for people with names similar to Carl Burnett Burchell, a veteran whose name was on several items in the box.

He finally spoke to Tim Burchell on Jan. 4, after messaging his wife five months earlier on Facebook.

When Burchell confirmed that the items had belonged to his father, a Navy veteran who died of cancer in 1988, Holst couldn’t believe it.

“It was just such an overwhelming feeling,” Holst said.

Holst, whose dad also was a veteran, sent the box by airmail to Burchell the day they spoke. Burchell tore into it immediately, recording a video so Holst could watch him go through the contents. Using Scrabble letters, he wrote Holst a thank-you message.

“It’s just priceless,” Burchell said of the parcel’s contents. “Obviously the flag is just a treasure trove right there.”

There was also a game of Scrabble, which Burchell’s dad played often while receiving chemotherapy, and a newspaper clipping from the time his dad dressed up as Santa. Also enclosed were a Halloween costume, a half-finished love poem from his dad to his stepmother, old family photos and letters from Presidents Richard Nixon and Ronald Reagan thanking the elder Burchell for his military service.

Burchell hadn’t missed the items, though, because he never expected them to arrive — and his stepsiblings never mentioned sending them.

The stepsiblings mailed the mementos to Burchell at an incorrect address in 2012, after Burchell’s stepmother died, and then moved themselves.

The two men have messaged and talked a few times, with Burchell even inviting Holst down to St. Marys, Ga., for a vacation.

Burchell said he’s incredibly grateful to Holst and his detective skills: “He’s what everybody should be.”

“I want to make sure he gets the credit he deserves,” Burchell said. “One little touch of kindness is contagious.”