The 5 sailors, who tested positive on Saturday, are in isolation off-ship. The Navy is no longer naming the ships with positive tests, the fleet announced Friday. 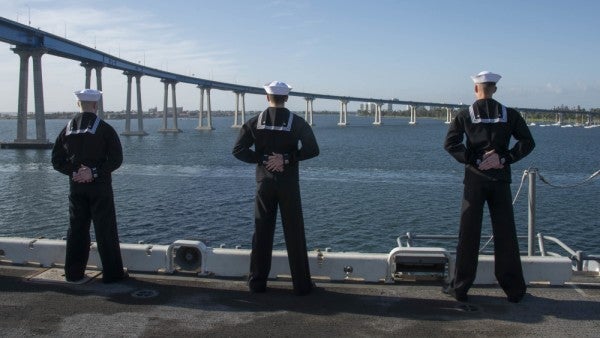 The five sailors, who tested positive on Saturday, are in isolation off-ship and restricted in movement, according to a Pacific Fleet statement. The Navy is no longer naming the ships with positive tests, the fleet announced Friday.

Previously, the Navy said two sailors on the amphibious assault ship Boxer and one on the littoral combat ship Coronado tested positive.

On Friday, the fleet announced two more positive cases on ships in San Diego but did not name the vessels. In a statement, the Hawaii-based Pacific Fleet did not explain why the Navy is no longer naming ships with COVID-19 cases, saying only that it is now its policy to name only the geographic region in which a sailor tests positive.

While the Navy is no longer naming the ships, a senior Navy official told the Union-Tribune Sunday that none of the cases are on board the hospital ship Mercy, which is preparing to deploy from San Diego to provide medical support in response to the spreading coronavirus.

Sunday's announcement brings the number of shipboard cases in San Diego to 10, and the total number of local military cases to 18.

The Navy and Marines have each instituted strict measures on bases and ships to curb the spread of the virus, including closing non-essential and recreational activities on bases and beefing up daily cleaning routines on vessels.